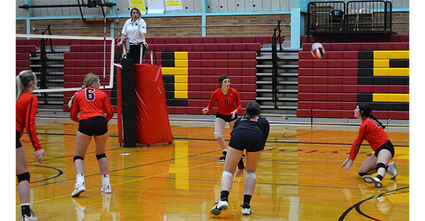 Claudia Benevides digs the ball in the match against Kittitas

DW COMBINE-The DW volleyball team won their non-conference match against Kittitas on Wednesday, September 7, in Dayton. Both teams struggled with passing the ball to the setter in the match that saw the Wolfpack players come from behind in each set to get their first win.

In the first set, senior Emily Rodrick, an outstanding setter, hitter, and server last season as a junior, served six straight points to take the come-from-behind win 25-17. Rodrick plays libero this season.  Kittitas took an early 6-1 lead in the second set.  The Wolfpack clawed their way back to the lead with a couple...