By Paul Ocker
The Times

Tri-City Prep Defense too much for Lady Wolfpack 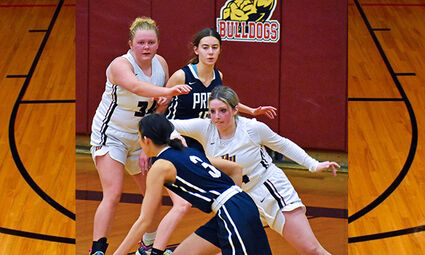 DAYTON - The Dayton Waitsburg Lady Wolfpack basketball team met the Tri-City Prep Jaguars in a conference game on Saturday night. TCP played a full-court press for almost the entire first half of the game and successfully wore down the DW players with a swarming defense. They followed up in the second half with both a 1-on-1 and a 1-3-1 zone defense and were able to shut the Wolfpack out entirely in the second half. While the Jaguars came away with the win, the Wolfpack had some bright spots, including more than 15 team rebounds, solid performances from Sagelyn Kilts, Teagan Culley, and Mak...