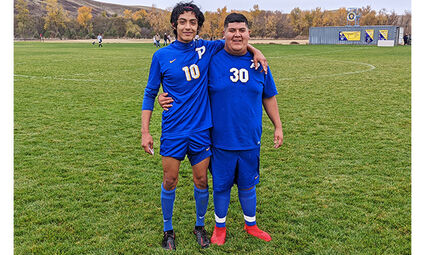 PRESCOTT – The Prescott soccer team hosted Riverside Christian School in playoff game with a spot in the State tournament at stake Friday November 5th. In the first half it wasn't clear who would come out on top. Both sides had good scoring chances and Prescott's goaltender, Ivan Martinez, made a couple of nice saves in goal to keep the score tied 0-0 after the first half. Jonathan Gonzalez nearly scored in the first half with a long shot that just missed the goal banging off of the top crossbar. As a team Prescott's passing looked a lot sharper than it had in previous games this season....