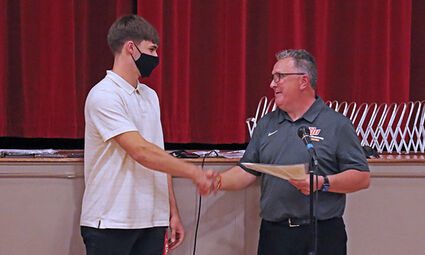 Coach Troy Larsen thanks senior player Sean Evans for his season. Evans' football skills have been noticed by multiple colleges, including Whitworth University.

Ella Larsen received the Coach's Award, while Amy Bly was recognized as the "Most Improved" player and Maddie Richardson as the "Best All-Around" player. According to Huwe, the JV team had a stellar serving record, averaging roughly 93% throughout the season.

On the Varsity team, head coach Tracy Barron shared that this year's team really started to work together as the season progressed, and she looks forward to future seasons. This was a younger team, with nine out of the 14 players being freshman this year.

"I could tell Peyton I need this done and she would just say 'okay.' And it got done every time," Barron said. "That's a lot of pressure to put on a freshman."

Teagan Larsen was voted the "Most Inspirational" player by her teammates, with Makenna Barron being recognized as the "Most Improved." Sadie Seney was selected as the Most Valuable Player.

Wolfpack Football coach Troy Larsen recognized all 18 of his players, most of whom were scholar-athletes. Larsen shared that he was impressed by the drive from his athletes and the leadership that the senior players showed.

Larsen said that, before the official season, he kept receiving phone calls with people reminding him that practices weren't allowed at that time. Upon investigating, he discovered that football athletes were hosting "POPS," or player-only practices, on their own time, following all precautionary guidelines while perfecting timing and execution on plays. Those practices helped the Wolfpack secure wins over three teams, a significant improvement according to Larsen.

Sean Evans was named the Wolfpack Player of the Year. Evans has received multiple college offers, and Larsen said he hopes for a 'big announcement' in the coming days.