Inside the matchup Seahawks vs. Rams 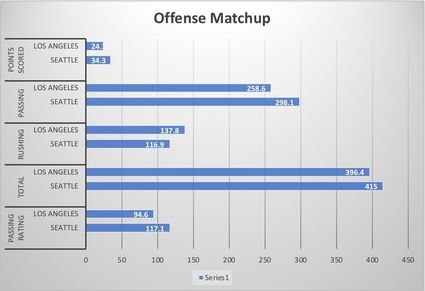 This week Seattle travels to Los Angeles to play the Rams. The Rams are 5-3 so far this season, and a win at home against Seattle would put them into a first-place tie in the division with the Seahawks. Because they are at home, the Rams are a slight favorite to win this week. Unfortunately, this looks like another game that Russell Wilson will need to be close to perfect for giving Seattle a chance to win since Seattle's defense continues to be an injury-riddled mess.

Jared Goff is the Rams quarterback. The former first pick in the 2016 draft is in his fifth season with the Rams. At the seasons half-way point, his numbers look to be on pace for last season's totals. His total yards are down a little, but his completion percentage is the highest of his career at 65.5%. While he does have two rushing touchdowns this season, he is not much of a threat to run, having gained only forty yards this season, matching last year's total.

The Rams running game is split between Darrell Henderson, Jr. and Malcolm Brown. Henderson's status for this week is listed as questionable, but he is expected to play this week after leaving last week's game early with a thigh injury. Henderson and Brown each have three rushing touchdowns on the season.

Receiving is the strength of the Rams offense. Yakima native and former Eastern Washington standout Cooper Kupp leads the Rams with five hundred twenty-seven yards receiving. Robert Woods leads the receiving core with four touchdowns this season. Nine of the ten players who have caught a pass for the Rams this season have averaged eleven or more yards a catch. 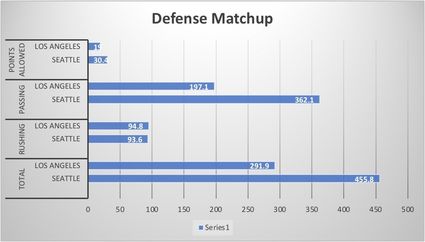 The Rams recently cut their rookie kicker Samuel Sloman after the first seven games of the season. Kai Forbath has taken over at kicker. Including last week, Forbath has only played in eight games over the previous four seasons. His last full season was with the 2017 Minnesota Vikings.

The Rams feature one of the best defenses in the league this year. They are currently ranked second in total yards allowed per game with 291.9 and second in points allowed per game at 19.0. Defensive tackle #99 Aaron Donald is a player to watch on defense; currently, he is tied for the NFL league lead in sacks with nine. Conversely, the Seahawks are dead last in defense, giving up 455.8 yards per game. The following Seahawks are listed as questionable for the Rams game: Mike Iupati G, Carlos Hyde RB, Shaquill Griffin CB, Chris Carson RB, Benson Mayowa DE, Ugo Amadi S, DJ Reed Jr. CB, KJ Wright LB, and Quinton Dunbar CB. Bryan Mone DT is listed as Doubtful.