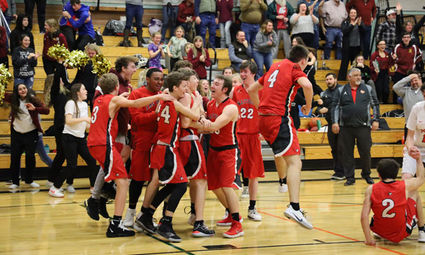 POMEROY-Dayton-Waitsburg held a 20-point advantage at the intermission, with a score of 28-8, however a pesky Pirate team led by 6-foot-2 sophomore guard Trent Gwinn, battled all the way back to tie the score at 40 on his three-pointer following a Pomeroy timeout that left 5.5 seconds on the clock.

With the game tied, junior Colton VanBlaricom inbounded the ball with a pass with five seconds left, to junior Sean Evans who then passed it up to a streaking Pettichord, who launched a prayer over Pomeroy's Byron Stallcop's raised arms from just across the half-court line. The prayer was answered, and chaos erupted in front of the Dayton-Waitsburg bench with an official 43-40 win. It would be the team's second win of the season.

"I felt pretty confident when the ball left my hands to go for the shot," Pettichord said. "We just wanted to win this game really bad, so we tried pushing harder than them in the second half and they came back, but we won the game at the final seconds."

But the game might not have come down to Pettichord's heroics if the confusion over how many points D-W had scored hadn't occurred. Despite three scorekeepers having 39 points for D-W after three quarters, the official book only had 37, thus two points were taken off the scoreboard to start the final eight minutes. Had Pettichord not made the winning shot there might have been an entirely different storyline including an overtime that shouldn't have happened. Thus, fate yet may have played a part twice in the final outcome.

The first half was a team effort with Wyatt Costello scoring the first points followed by three-pointers from Mason Finney and Dylan Bledsoe. Also scoring were Pettichord and VanBlaricom. VanBlaricom finished with a team high 14 points while Finney had a career night with 13 points.

The intensity of the game as well as the volume of the crowd, particularly between the opposing student cheering sections, increased dramatically at the start of the fourth quarter. Dayton-Waitsburg maintained a 10-point lead following senior Tayven Seney's lone basket with three and half minutes left in the game. D-W would only score once more, a single free throw from VanBlaricom with 40 second left before the winning shot as time expired.