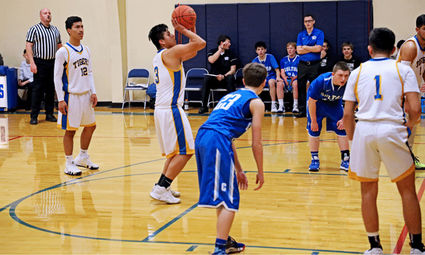 Victor Garcia sinks both free throws against Colton in the 1st Quarter.

PRESCOTT-Prescott High School boys basketball played Colton High School Friday the 17th in a home conference game. Coming into this game Prescott had won four straight games to start the New Year. Three of those four included conference wins over Oakesdale, Pomeroy and St. John. Normally the top four teams in the conference advance to the playoffs. If that is the case again this year, then Prescott is in excellent position to advance to the playoffs with six games left in the regular season. They are currently the 3rd seed, with an opportunity to move up in the standings with several conference games left.

This game started with the teams trading baskets and a 3-3 score. From there, Prescott went on a 12-6 run. All of Colton's nine points came from the three-point line, two of them from #5 Chris Wolf, and one from #10 Jackson Meyer. Meanwhile, Prescott's scoring was spread out over four of the five starters, though Victor Garcia led his team with ten 1st quarter points.

In the 2nd quarter Prescott started to pull away, but Colton's Chris Wolf kept his team in the game with three-pointers and drives to the basket scoring all eleven of his team's 2nd quarter points. Prescott went into halftime up 29-20. Prescott was the bigger team on the floor and they played like it. Three-pointers Colton shot and missed, were quickly rebounded and turned into scoring opportunities on the other end. One memorable possession for Prescott had them taking three quality shots by different players that didn't result in points. All of which were made possible by great rebounding.

The 3rd quarter opened with a three-pointer by #12 Jonathan Cardenas. Later in the 3rd quarter, #3 Victor Garcia hit a nice three-pointer to make the score 40-26. Cardenas would steal the ball at the other end of the floor and bring it all the way back for a layup. And to close out the quarter a nice pass from Cardenas found Garcia for the layup before the buzzer went off to end the quarter 47-29.

#1 Omar Velazco opened the scoring in the 4th quarter, making his shot while being being fouled in the lane. He then sunk his free throw to complete the three point play. A little past the midway point of the 4th quarter, with Prescott comfortably in the lead, their bench got involved. Velazco stayed on the floor as point guard to lead the team through the final minutes for the 65-51 win. Victor Garcia finished with a game high 28 points including 6-11 shooting from the three-point line.

Coach Allyn Griffin had this to say when I asked him about the game. "The more I watch these guys the more excited I get about how far they've come. It is just amazing what these starters do on a nightly basis and I'm going to ask a lot of them tomorrow when we go up to Garfield-Palouse. But historically Colton gives us trouble and they are a good team. We played well tonight. We shot better than they did. We out-rebounded them, we out-hustled them. I mean we beat them, but I'm really pleased with our effort and the way these guys worked."