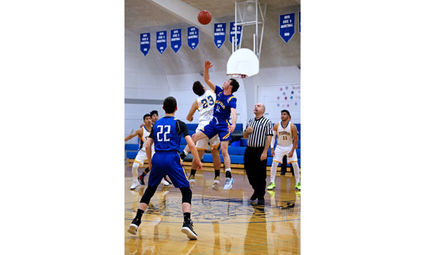 LACROSSE-Prescott traveled to LaCrosse High School to host Wilson Creek January 7th in a non conference game. Wilson Creek and Mary Walker are two teams from the Spokane area Prescott plays in LaCrosse. LaCrosse acts as a midway point to reduce travel distances for both schools.

Prescott dominated from the opening tip off and quickly built a big lead. #12 Jonathan Cardenas made a great pass to an open #3 Victor Garcia for a layup. Moments later #11 Antonio Hernandez completed the three-point play making his foul shot. With a few minutes left in the first quarter, coach Allyn Griffin began going to his bench after building a 16-3 lead. Wilson Creek had difficulty scoring in the 1st quarter. Many of their attempted shots were long contested three-pointers that didn't find the mark. Eventually they managed to score on an offensive rebound and later on a single foul shot.

The second quarter looked a lot like the first with Prescott very much in control of the game. After #23 Miguel Ayala scored on a layup to push the lead to 25-5, Wilson Creek called a timeout and attempted to regroup. After the timeout #1 Omar Velazco put back an offensive rebound for two of his team-high thirteen points. Prescott went into halftime with a commanding 31-8 lead.

In the second half, Prescott's bench played significant minutes and contributed in various ways. #10 Hector Garcia pulled down rebounds on defense and #5 Mauricio Osorio had a nice block of a potential Wilson Creek layup. #2 Manny Sanchez hit a three-pointer in the 4th quarter. Prescott would win this one 45-20. When asked about the contributions from his bench coach Griffin had this to say. "Happy with the way they went out and competed. They have to get better for our team to get better."