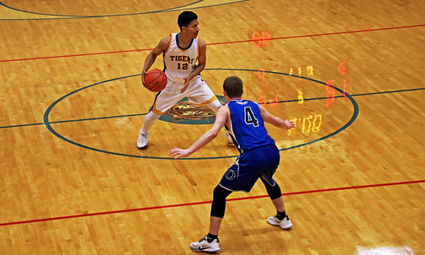 PRESCOTT-Prescott hosted Oakesdale Saturday January 4th in an early afternoon conference game. The crowd size was smaller than usual, likely due to the holiday break and 4 p.m. start time. The first quarter belonged to #12 Jonathan Cardenas. He opened the scoring in the first quarter with a jump shot then put on a show hitting three pointers. His first was an open shot that barely moved the net. On his next three, he was well-guarded and the shot was contested by Oakesdale but it didn't matter. The ball made a loud ripping sound that could be heard over the approximately 60 fans in attendance. In total, Jonathan would hit four three-pointers in the game all in the first eight-plus minutes which included the first seconds of the second quarter. Despite the hot start, Oakesdale stayed in the game and the first quarter ended 17-14 Prescott.

In the second quarter, Prescott's defense tightened up, led by #23 Miguel Ayala who contested everything in the lane and blocked a shot from Oakesdale so hard it looked like a volleyball being spiked. #3 Victor Garcia took over on offense, scoring five of Prescott's ten points in the quarter. #1 Omar Velazco also added two of his own making a nice running shot. Oakesdale's only points in the quarter were on a three pointer from Tyler Bober. At the half, Prescott led comfortably 27-17.

In the 3rd quarter, Oakesdale would go on an 11-4 run, cutting Prescott's lead to 3 points before a Prescott timeout. The 3rd quarter would end with Prescott clinging to a 34-30 lead and a sense that all the momentum had shifted to Oakesdale.

With 4:35 left in the fourth quarter, Oakesdale scored to cut the lead to 36-34. Prescott scored next to make it 38-34. On the next possession, Simon Anderson hit a three-pointer for Oakesdale, making it a one-point game at 38-37 with about a minute left. From here, Prescott, normally a good free throw shooting team, went on a strange stretch where they would miss the first of two free throws but then make the second. First, it was Jonathan Cardenas who made one out of two to make the lead 39-37 with 47 seconds left. After stopping Oakesdale on offense, #11 Antonio Hernandez was fouled rebounding. He also missed the first free throw but made his second to make the score 40-37 with about 30 seconds left. With Oakesdale down by three points, Tyler Bober shot a three pointer but missed and fired off another before Miguel Ayala was fouled getting the rebound. He also missed his first free throw but made his second to put the score at 41-37. Cardenas was fouled rebounding on defense and closed out the game making both free throws for a final score of 43-37.

Head Coach Allyn Griffin had this to say after the game. "It came up in the locker room that we have never beaten Oakesdale as long as I've been here." Coach Griffin is in his 5th season as head coach for Prescott. "That was a really big win for us. I'm extremely proud of those guys. Omar, Miguel, Johnny, Victor, Antonio. Tremendous heart."