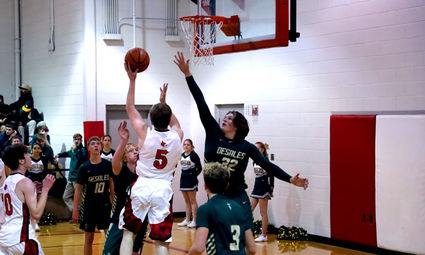 Dayton-Waitsburg's boys basketball team came out firing with two three-pointers and a quick lead but in the end D-W couldn't maintain the wild, fast, and physical play from DeSales in the league loss 63-40.

Sophomore shooting guard Dylan Bledsoe, sporting a new haircut, scored D-W's first six points. He would finish with only eight for the game. Junior guard Mason Finney scored the teams other five points of the first quarter with a great shot off an inbounds pass and then with 45 seconds left nailed a three-pointer. The first quarter ended with a one-point lead for the Irish, at 12-11.

A 9-0 run by the Irish to start the second quarter foreshadowed how the game would finish. DeSales had just too many weapons as five different players scored, including five to end the half by 6'3" Senior Timmy Worden, who would lead all scorers with 15 points. Senior Bobby Holtzinger, who finished with 12 points, put the game out of reach in the third quarter with two three-pointers and a penetrating layup with 2:29 left to give DeSales a 44-23 lead.

Dayton-Waitsburg's Junior guard Colton VanBlaricom led the team with 11 points, nine of which came in the fourth quarter. D-W maintained the fast-paced intensity this game required until the end of the contest but just could not overcome missed shots and 20 turnovers.

The loss drops D-W to 0-2 in Eastern Washington Athletic Conference play and 1-7 overall. DeSales improved to 2-2 in league play and 4-4 overall.

Dayton-Waitsburg played at Walla Walla Valley Academy on Tuesday Jan. 7 and will host White Swan at the Waitsburg gym at 6:30 p.m. on Saturday Jan 11.