By Dave Schreindl
The Times 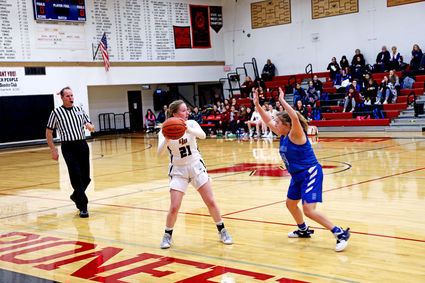 MILTON-FREEWATER-Dayton-Waitsburg's girls basketball team came so close to flipping on a switch and getting their first win of the season at the Mac-Hi Christmas tournament. Instead they dropped a 38-30 non-league contest to Stanfield.

D-W played even with the Tigers for three quarters, it was the opening period's 14-7 and subsequently the seven-point deficit that they could never quite overcome. Dayton-Waitsburg was also bit by the turnover bug as they had 10 more turnovers than Stanfield 33-23.

Despite poor passing all morning, D-W's two forwards easily got the ball in the paint and put the ball up forcing Stanfield to foul them. Junior Sadie Seney and Freshman Claudia Benavides each scored 10 points and went to the free-throw line a combined 21 times, nine more times than the entire Stanfield team. The pair each scored only four times from the charity stripe as the team finished with nine points on 25 attempts.

Dayton-Waitsburg scored first in the game as Junior Captain Mackena Culley hit the team's lone 3-pointer two minutes into the contest. But after a bucket by Seney with three minutes left in the first quarter, Stanfield went on a 7-0 run punctuated by a layup by Nyah Tejeda on a fast break. Stanfield was led by Senior Kylee McClure's 11 points.

Benavides hit two free throws on a one-and-one opportunity 40 seconds into the fourth quarter after a turnover and a foul by the Tigers to pull Dayton-Waitsburg to within 4-points, 29-25. Six unanswered points later by Stanfield including a basket by Brielle Howland on an inbound play, put the game out of reach at 35-25, particularly as Oregon does not play with a shot clock in high school basketball.

Dayton-Waitsburg looks to bounce back this Saturday, Jan. 4, when they return to league play and host DeSales at the Waitsburg gym at 5 p.m.