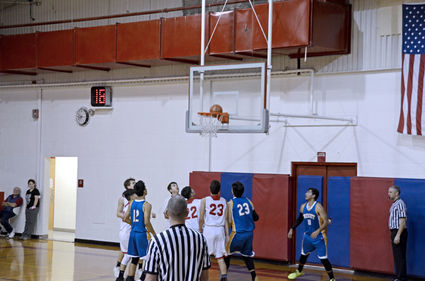 #11 Antonio Hernandez passes to #23 Miguel Ayala for the layup.

TOUCHET-The Prescott boys basketball team traveled to Touchet Friday December 21st for their 2nd conference game of the year. Prescott quickly established an early lead in this one, starting the game on an 11-0 run in the first quarter. They ended the 1st quarter with a 16-4 lead. The Touchet Indians started off the 2nd quarter by hitting an open 3-pointer to cut the score to 16-7, but Prescott would answer with another run, this time a 9-0 run that opened the lead to 25-7. From here both teams would trade baskets and at the half Prescott was up 37-19.

In the 2nd half, Prescott would continue to increase the lead with a 15-2 run to end the 3rd quarter with the score 64-31 Prescott. Prescott would win 66-49. Highlights -#12 Jonathan Cardenas with a breakaway layup in the first quarter. #23 Miguel Ayala scores in heavy traffic. #3 Victor Garcia with the finger roll layup in the lane. #1 Omar Velazco splits two defenders and scores.

As a team, Prescott shot 50 percent from the field making 27 of 54 shots. They were led by Jonathan Cardenas who went 9-10 from floor including 3-3 from three-point range. All five of Prescott's starters scored in the balanced attack.