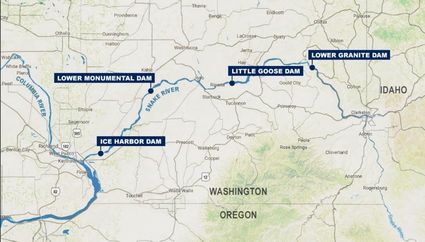 Currently, The US Army Corps of Engineers operates the four run-of-river dams and locks on the lower Snake River in Washington: Ice Harbor, Lower Monumental, Little Goose and Lower Granite. Together, the LSRD produce 1,000 average megawatts of electricity annually, which is roughly the amount of electricity Seattle City Light consumes annually. They help meet peak power loads and contribute to the reliability of the power transmission grid. They also provide river navigation and transportation between Lewiston, Idaho, and the Tri-Cities, Washington — more than 100 miles — and access to ports on the lower Columbia River.

The report concluded that “There are significantly different views of the impacts from breaching the dams on salmon, orca, agriculture, transportation and economics. More information is needed to create opportunities for greater understanding. Energy, transportation, agriculture, salmon and orca are complex issues and decisions about the lower Snake River dams need to consider the broader systems and context for each. Each issue is dynamic, future changes may provide more options as well as more challenges. People across the diversity of interests expressed the desire to have more informed and respectful conversations.”

Three workshops will be held in Clarkston, the Tri-Cities, and Vancouver, where the public can listen to a presentation and panel discussion to better understand the issues. Public comment will not be heard at the workshop, but attendees can submit written questions at the meeting that could be addressed, if time allows. Residents in the state of Washington have until Jan. 24 at 5 p.m. to submit written comments by email to: infor@lsrdstakeholderprocess.org with ‘Draft LSRD Report’ in the subject line, or by writing to LSRD Stakeholder Engagement Draft Report, c/o Tess Wendel, 325 Fourth Ave., Suite 1600 Seattle WA 98101.

The public workshops will be held at the following locations and times:

All species of salmon that use the Snake River are currently listed as threatened or endangered under the Endangered Species Act. The LSRD, along with four other federal dams on the lower Columbia River, are the biggest human-constructed obstacles Snake River fish and other aquatic species encounter on their migration to and from the Pacific Ocean

Five tribal nations are primarily impacted by the LSRD: the Nez Perce Tribe, the Yakama Indian Nation, the Confederated Tribes of the Umatilla Indian Reservation, the Confederated Tribes of the Warm Springs Reservation of Oregon and the Shoshone-Bannock Tribe. The LSRD are part of a broader set of impacts of European settlement on tribal nations, which include the loss of tribal lands and suppression of tribal cultures. At a practical scale, the dams affect tribal people in two main ways: (1) They affect the abundance and distribution of salmon and reduce salmon fishing opportunities and harvest available to tribal people and (2) They cut off access to tribal fishing, hunting and harvesting of roots, plants and berries and prevent tribal people from holding religious and cultural ceremonies at their usual places

Opponents to breaching the dams argue that it would lead to increased shipping costs and a downturn in the overall grain economy due to the loss of barging. Another argument asserts that water levels would not be stable enough to provide reliable irrigation if the dams are breached, which would lead to increased costs, uncertain infrastructure upgrades, uncertainty of water supply and shifts in the type of agriculture that is viable.

The full report can be accessed here: https://tinyurl.com/yx2jz7kj