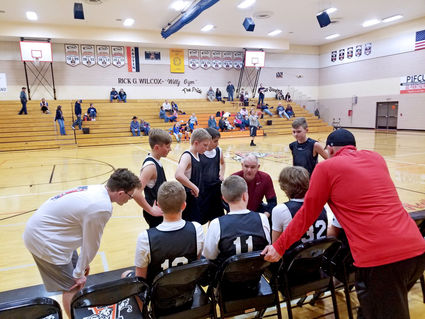 Coach Jason Mings has full attention of his team as he gives direction during the Asotin Hardwood Classic Tournament last weekend.

ASOTIN – The AAU BirdDogs ended their season in a back-and-forth win-loss series at the Asotin Hardwood Classic Tournament last weekend.

The Dayton-Waitsburg team got off to a good start to win their first game against the Clearwater Valley Rams 46-21 before losing to Kamiah 26-42.

They were back in the contest with a 39-26 second win against the Rams in the semifinal game. They ultimately lost the championship game 33-46 to Kamiah, to take second place in the tournament.