Wolfpack Get Win Over Visiting Naselle 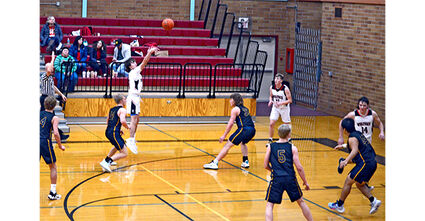 DC COMBINE-The Wolfpack boys hit nine 3-pt shots on their way to a 55-31 victory over Naselle in basketball action on December 20th.  Spencer Hansen hit a 3-pt shot to get the Wolfpack on the scoreboard and the team led 11-6 after one quarter. The Comets took a brief lead early in the second quarter before 3-pts shots were made by Hansen and Gage Holm. Joe Patterson hit a two-point shot to end the half with the Wolfpack ahead 22-15. Two 3-pt baskets by Ryland Kilts and five points each from Hansen and Monte Pettichord extended the Wolfpack lead over the Comets 38-25. Kilts, Hansen and Holm...