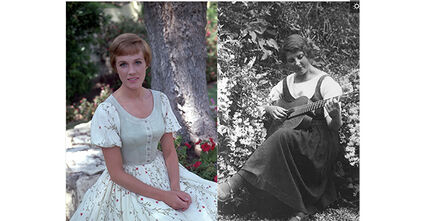 This November, our community has enjoyed live performances of the musical "The Sound of Music" at Dayton's Liberty Theater.

If you know who Julie Andrews is, then you probably know the story of the Van Trapp Family from the movie "The Sound of Music." Maria, the impetuous postulate-nun-turned-nanny, won over the heart of the strict, ex-naval captain widower and his seven talented children.

The actual Van Trapp family was more human and complicated than their screen and stage counterparts.

It turns out that Georg von Trapp was the soft touch of the family, and Maria was the one who needed to lighten up. Like the character, the real-life Maria was a novice nun sent by the abbey to be a nanny before taking her vows.

Maria arrived at the Von Trapp home in 1926 to care for only one, not all seven children, who was recovering from illness. The other six were in boarding school, so there was probably no marching or choral harmonizing when she arrived.

Within a year, Georg fell in love and asked Maria to marry him. According to her autobiography, Maria was not immediately taken with Georg. He was 25 years older, and she was emotionally unavailable. However, in his proposal, he asked her to marry the family. Her love for the children convinced her to give up her future at the abbey to become their mother.

The family, including Georg, had enjoyed musical activities before Maria arrived. It was only after the family lost its fortune in the worldwide depression of the 1930s that the family considered performing in public. Maria had already tightened the belt, letting go of most of the servants and taking in boarders by that time.

In a 1978 Washington Post interview, Georg and Maria's daughter Eleonore said, "It almost hurt him to have his family onstage, not from a snobbish view, but more from a protective one."

After the wedding, the von Trapps stayed in Austria for another eleven years, leaving in 1938 after Nazi Germany annexed the country. As in the play, Georg von Trapp refused to fly the Nazi flag at his estate and refused a commission in the German Navy. Not included in the screenplays was that he also rejected a request to sing at Hitler's birthday party.

Fortunately for the family, they did not have to climb every mountain, or at least the Swiss Alps, to escape. They could leave the country in daylight, driving over the border the day before it closed.

After touring on a visa to perform in the United States, they eventually decided to settle in Vermont. In 1942, the family bought a 660-acre farm in the mountain community of Stowe, where they first opened a music camp and then the Trapp Family Lodge. The mountain resort lodge, still owned by the von Trapp family, is now on 2,500 acres and continues to offer Austrian-inspired architecture, style, and music.

Maria wrote the "Story of The Trapp Family Singers" in 1949. The book was the basis for the Rogers and Hammerstein Broadway musical "The Sound of Music" in 1959 and later the 1965 movie starring Julie Andrews. With each version, there were changes from the original book. Ten kids became seven, and the order changed.

In real life, the oldest von Trapp child was Rupert, but in the film, it's a girl, a sixteen-year-old going on seventeen, Liesl.

"In the real family, my oldest sister was Agathe, and she was a very introverted person," says Johannes in an interview with the BBC, "and the thought of her doing that song and dance routine with the telegraph boy had us all rolling in the aisles in stitches."

Both were box office hits; however, Maria did not receive any financial gains from the productions as she had sold the rights to her story to a German producer in 1949.

The book that started it all, "Story of The Trapp Family Singers," by Maria von Trapp, is still available in paperback, or you may be lucky to find a used hardback edition. A more recent book, "Memories Before and After the Sound of Music: An Autobiography" written by the eldest daughter Agathe von Trapp at age 89, was published in 2010. It is also available in print and digitally on Amazon at https://tinyurl.com/4y7np8dd.

And, of course, if you are lucky, you may still be able to get tickets for the production at The Liberty Theater in Dayton at http://www.libertytheater.org. The hills are alive with the sound of music.