A Timely Hunt for Valley Quail 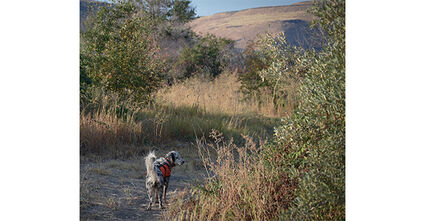 One of the things I appreciate the most about valley quail is its laid-back personality. The older I get, the less likely I am to crawl out of bed in the dark to go hunting. I am still motivated, but my best sleep comes from about 4:00 a.m. to 7:00 a.m., making hunts earlier than 8:00 a.m. less desirable. Coincidentally, valley quail tend to agree with me. They often loaf in the thick stuff on cold mornings before heading out to feed around 8:00 a.m.

Eight o'clock is when I asked Dale to meet me in one of my favorite public quail covers. Dale is a southerner who had not hunted birds out west. We met after he moved to Washington to take a job.

Dale's punctuality is a virtue. It was no surprise to see him standing behind his rig, vested up, and clutching his new pump gun as I rolled into the parking lot ten minutes early. He offered an approving nod at my timely arrival.

The morning bloomed beautifully, with the sun breaking across the basalt bands that formed a bluff over the Snake River. Alder and cottonwood leaves were fading to gold while the thickets of sumac and rose burned crimson against the tawny hues of intermixed shrub-steppe. Sagebrush stood healthy and sharply aromatic. Rabbitbrush wore a crown of canary flowers atop its soft green sprigs. Songbirds and waterfowl were stirring-an utterly perfect welcome to the day.

Dale and I glanced over the map of our hunt before my little tri-colored setter, Yuba, sped off at 8:00 a.m. sharp. We would work a line of brush to the right toward the river, then circle back and push down the shoreline. Yuba aimed for the blackberry-enshrouded, seafoam-green Russian olive thickets. Hawthorn poked from the thickets boasting candy apple-red berries, which contrasted with the black fruits of the neighboring choke cherries. The abundance of cover and mast could sustain a thousand quail. We were certain to encounter at least a couple of coveys.

As we moved along the berries and thorns, the faint calls of a covey drifted on the breeze. They were emerging from the blackberries one hundred yards distant. Yuba worked into the breeze as Dale, and I followed.

"What does she do when she finds birds," Dale asked, having never hunted with a dog.

"When she catches the scent, her head drops, her tail goes up, and she stands on point. Just like that", I explained while thrusting an arm at Yuba.

The covey continued to call the tell-tale "chi-ca-go" sound as we approached, and as Yuba rounded the end of the blackberry patch, she locked onto a textbook point.

"Get ready and walk right in behind her," I coached. When hunting grasslands for birds like pheasant and partridge, I like to circle the dog and come in head-on to pinch the birds between us, but that can be a challenge in thicker quail and grouse covers.

The covey erupted to our left as Dale stepped up behind Yuba. They had likely congregated in the open patch where Yuba stood before moving into the grasses and weeds. We were caught off guard, and the birds flushed a bit far out, but I followed with a report from my side-by-side.

"They were too far, right?" Dale questioned.

I was unsure if he was legitimately asking the question or wanting to educate me carefully. Dale is smarter than me and surprisingly adept at wingshooting, which I was learning through his expert observations and gun handling.

I took no offense to the question, as my anxiety over the first hunt with a new partner who had never shot over a dog was easing.

"Yes, they were a bit too far by the time we had a bead on them, but I decided to try anyway," I returned.

We looped back toward the river, lured by another covey calling down the shoreline riparian strip.

The brush was heavy for as much as thirty yards between the edge of the shrub-steppe and the Snake River and filthy with quail. We climbed the hill to walk the edge of the grasses with Yuba in the lead, but before I rounded the last patch of honeysuckle, Dale pointed at Yuba, who was pointing a covey of about sixty birds.

Yuba eased ahead with Dale and me on her heels. The birds were popping up by the dozen and flushing from the grasses into the thicket.

"Let's get up there. A few stragglers should be left once we are in shooting range", I coached.

By the time we had closed in, three-quarters of the covey had flushed, but we only needed those last few birds to pop. Yuba stood solid ahead, and I suggested Dale stay put while I stomped into the spreading blackberries to our left. Ten feet in, a couple of birds erupted.

I heard my shot alone and was thrilled to see the bird fall, but I was taken aback when Dale "whooped" at his good fortune. Our target acquisition and trigger tugs were identically timed, and I happily agreed that the bird was his – a beautiful mature hen for a great shot.

The backdrop of the Snake River with its blue surface reflection, the coffee-colored basalt bluffs, the canary-yellow rabbitbrush blooms, and the green of the Russian olive made a spectacular photo as Dale posed with his stormy gray hen with the cream streaks and stubby black top knot.

Pushing on, we walked the trail to its end in a blackberry thicket where the property boundary pinched down to the water's edge. As we entered the thicket, quail began busting to our left. Yuba stood on point with Dale and me backing her, shotguns at the ready. We stood still, waiting for the birds to get nervous and flush. With a few careful steps forward, several decided to fly from left to right through an opening.

Again, Dale and I were identically timed in the shot, and the bird tumbled instantly. The difference this time was the cloud of feathers that puffed from the bird as the shot connected. I had given Dale my last handful of quail loads while I was shooting heavy steel. Good for pheasant and waterfowl but not recommended for covey birds.

"I love to see other hunters get their bird, but I truly enjoy it when everyone gets a bird," I exclaimed, claiming the handsome little male.

The morning was warming and Yuba tiring, so we returned to the truck, took a few photos, and called the day a success. That afternoon, as I cleaned my quail, Yuba slept a well-earned snoring slumber while Dale sent pictures of his quail, butterflied and sizzling on the grill. The zenith of a good day's gunning. Visions of future hunts came to mind, and I smiled at the prospect of having a new bird-hunting buddy, one whose skills and wit would soon make a fool of his mentor.