By Paul Ocker
The Times 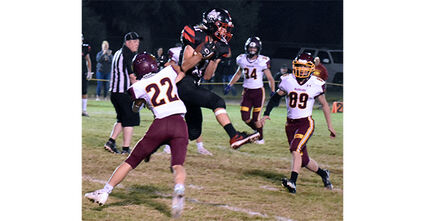 DW COMBINE-The Wolfpack (2-0) and Warriors (0-2) played an impressive defensive contest, with turnovers playing a key component in the outcome. Although the Warriors were a larger team, with the lineman averaging well over 200 pounds and DW averaging about 180, they were well-matched defensively. Offensively, the Warriors had the advantage on the ground as benefitted from the large front line and were led by a talented #24 Mason Hilberg. At the same time, the Wolfpack dominated the air as led by #10 Monte Pettichord.

While there was no scoring in the first quarter, both teams moved the ball...