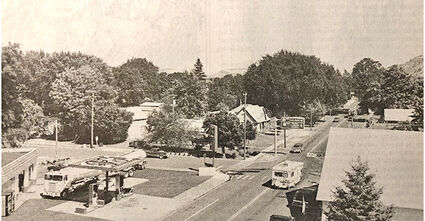 When community members in Waitsburg need help with a project, they typically know who to call. However, some volunteers in town simply show up offering to help. Jim Davison is one of those helpers. "He's a really great, silent volunteer," said Denise Winnett, who worked with Davison at Waitsburg High School. Winnett, who lives within viewing distance of the ongoing construction of the new press box at the Waitsburg High School football field, said she sees Davison out there working on the project early in the morning when it's still cool. He goes home just in time to make his wife dinner, she added. School Board Chairman Ross Hamann, who has been heading up the projects at the football field this summer, said Davison isn't even part of the groups sponsoring the project. He simply came out because he wanted to lend a hand.

[Photo Caption] take a good look, folks, for this area of Waitsburg will soon have an entirely different appearance as all of the houses from Coppei Avenue to the Preston Avenue Bridge are part of the Flood Mitigation Buy-Out Program. Once the houses are removed, Preston Park will comprise the entire block. The possibility of constructing a rest area along SR12 has been discussed.

Mr. and Mrs. C. R. McBride and daughter, Margaret, and Miss Betty Lou Weeks of Dayton have returned from a week's vacation at Deer Lake near Spokane.

Apple harvest began on the Dumas estate Monday, which is several weeks earlier than last year.

Robert Dale Wardrip and Charles Dowell returned Sunday evening from Seattle, having taken their two-week's cruise in the Navy Reserve.

Mrs. Clarence Eaton is enjoying a visit with Mrs. W. T. Brown, who arrived recently from Spokane. Mrs. Brown was an old friend and neighbor of the Stimmel family in Oklahoma.

The Misses Ruth and Avis Eular have been employed to teach in the G. G. Bickelhaupt and King Witt district north of this city. Miss Avis Eulor taught there last year but a two-year high school course has been added this year to which a number of pupils in that and surrounding districts will attend requiring a second teacher.

Miss Mollie Collins and her brother Harry, are spending a few weeks in the mountains, wooing back their fickle health from the pine scented breeze of Touchet Canyon.

B. M. Kent's harvesting crew went on a strike Monday, but instead of yielding to the demands of the strikers, B. M. pulled his machinery into the barn and quit.

Misses Adelle Morgan and Fannie Weller, two of Waitsburg's most charming young ladies, will leave next week to attend the Ellensburg State Normal.