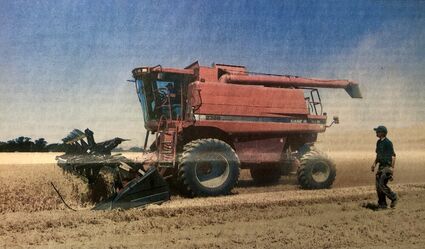 [Photo Caption] Inspecting combine 2, David White walks along to make sure the settings are correct on farmland north of Walla Walla recently. Some farmers in the north are battling unripened wheat that is pushing back harvest even further.

The 1997 grain harvest in the area should be about complete sometime this week, according to J. E. McCaw of the Touchet Valley Grain Growers. "I'd day we're about 95% done," he said. Yields were average to slightly above average in the Waitsburg area, he said. Prescott-area grain farmers experienced yields higher than expected. "We heard of some 90 to 100-bushel-per-acre yields in the Prescott area," McCaw said. Harvest this season was relatively rain- and fire-free, he added, compared to last year. In 1996, record rainfall resulted in thick straw and record yields. The thick straw contributed to a combine rollover, several combine slides, and numerous fires.

Wheat harvest in the Waitsburg area came to a screeching halt Tuesday when rain interrupted the operations which were in full swing. Regional reports indicate that about 60% of the grain has been harvested, and Touchet Valley Grain Growers manager John Egli said that this would hold true for the Waitsburg area. The possibility of quality deterioration due to excess moisture is a possibility, but Egli said that he felt if the weather cleared it would cause little or no problem here. Some ranches have finished harvest while some acreages have not yet begun. Egli said that the crop is good and grain quality high – it should be comparable to the very fine 1971 harvest. The Grain Growers should be "buttoned up" by Labor Day unless more unseasonable weather delays the combine activity.

Foundation work for the Earl Freeman home on west Seventh has been completed and a house will be moved there from the Byron Neace ranch. The Freemans plan to remodel and redecorate and to build a garage.

Word form Jake Smith and family to Mrs. Floyd Rhay states they are enjoying their trip east despite the heat. They attended a double header baseball game between the Cards and the Pirates and are now on the east coast.

The Bruce Bros. stationary outfit and two headers finished harvest on Wednesday and Oscar Abbey expects to get through this week with his combine.

Miss Birdie Hamm who was operated on at a Walla Walla hospital some time ago, is so far recovered as to be brought home Monday.

Roland Allen, Jr., son of Mr. and Mrs. Roland Allen, retuned home Tuesday from a couple of weeks spent in the Wenaha Forest Reserves at the C. A. Hales sheep camp. He came down with Marvin Hales who is packing in supplies to the camp this summer.

The Klondike fever has broken out in the Valley, and a number of our good citizens are lying awake nights, planning ways to reach the new Eldorado when the arctic day grows long again.

Born in this city at 2 o'clock on Thursday, Aug. 19, to the wife of H. J. Abbey, a son. Just two hours after the birth of the child, the father laid down by the side of his wife, gave a gasp and died. He was in apparent good health to the minute of his death. The child is doing nicely, and Mrs. Abbey is getting along better than expected under the shock.

The price of horses is on the upward grade.