Dayton Kiwanis to Celebrate 100 Years of history and service 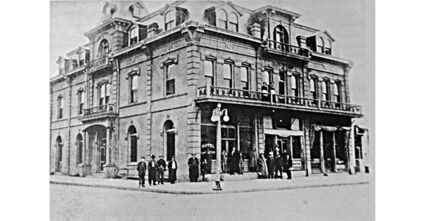 The Dayton Hotel was the location of the first Dayton Kiwanis Club meeting. The club is holding its Centennial celebration on Saturday, September 17 at 5:30 p.m.

DAYTON-100 years! The Dayton Kiwanis Club has set the date of its Centennial celebration for Saturday, September 17 at 5:30 p.m. at the Barn at Blue Meadows on North Touchet Road.

Kim Lyonnais, club president, said, "We're looking forward to a fun, wonderful evening with a catered dinner followed by a presentation of 100 years of history in Dayton."

The Walla Walla Kiwanis Club sponsored the first organizational meeting at the Hotel Dayton on October 19, 1922, with 59 charter members in attendance. Dayton's Club grew to over 70 members in the 1930s and 1940s.

The primary mission was to support the youth of Columbia County. The club succeeded over the years in many ways. Members worked with youth on projects but provided financial support for little league, soccer, swim teams, 4H, Road to Leadership, summer rec programs, college scholarships, and many others. The Club also built the roof over the park picnic area, installed benches, built the Big Toy at the school, and worked on many other projects.

Lyonnais said over the years, and members had expressed their appreciation for the organization because of the friendships developed, the fun and informative meetings, and the strong sense of teamwork to accomplish good things for the community.

The Club's history of Thursday luncheon speakers includes Frank Finkel, one of the first invitees, who shared his controversial story as the only survivor of Custer's Last Stand.

Subsequent programs featured nationally known athletes and elected leaders, of which some will be shown at the Celebration.

Internationally, The Dayton Club was influential in beginning the Yamate Exchange Program with Japan and participated in the startup of the first Kiwanis Club in Russia.

The Club President also stated he thought every Dayton High School graduate would remember some experience or benefit received from Kiwanis.

Lyonnais said, "the club has always had a very positive impact in our community. It is a wonderful reason to celebrate! We invite the public to join us!"

Tickets for the event are $50 and must be purchased by September 10. Tickets are available in person at the Dayton Chamber of Commerce Office or by calling the Chamber Director, Belinda Larson, at 509-383-4825 or call Gary Schroeder at 509-629-2471.