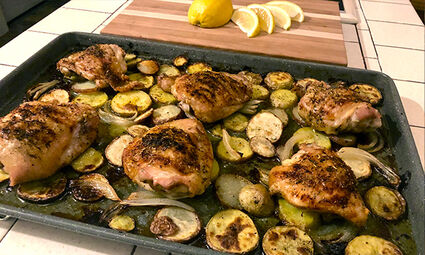 As regular readers of my column might recall, I often use my time in the kitchen to satisfy my periodic bouts of wanderlust. Recreating discoveries made during past travels, or dreaming of future trips, cooking and eating have become an extension to my passport. Music, like great food, can have the effect of transporting me to faraway places, with my kitchen playlist often influenced by what is on the stove. There are passionate Mexican corridos on my stereo when stirring a pot of mole, while it is often Puccini and Verdi who help me tend to a creamy risotto. Recently, it was daydreaming of springtime in Paris, that had me roasting chicken while listening to the iconic chanteuse, Édith Piaf. Her unmistakable voice guiding me as I attempted to reinterpret the flavors of a bistro classic, poulet roti. In France, a popular preparation is for a whole chicken to be slow cooked on a rotisserie, while its juices drip into a tray of roasting potatoes below. The resulting potatoes melt in your mouth with rich chicken flavor, while the tender bird has perfectly crisp skin. Here I have used a sheet pan, roasting chicken thighs on top of sliced potatoes, to create a quicker weeknight version of this beloved French staple.

Juice of ½ a lemon

Preheat oven to 450 degrees. Slice the onion lengthwise, into ½-inch thick wedges. In a mixing bowl, toss potato slices, onion wedges, with 3 tablespoons of the olive oil, the rosemary, and a pinch of salt and pepper. Arrange the vegetables in a single layer on a rimmed baking sheet. Season both sides of the chicken thighs with salt and pepper to taste. Then evenly sprinkle the thyme and paprika on both sides. Place chicken on top of the vegetables, and drizzle remaining oil over the tops.

Place pan on center rack of a hot oven. Roast until the chicken is cooked through and the potatoes are golden tender, about 30 to 35 minutes. Use a meat thermometer to check the chicken. Some of the outer layers of potatoes will be extra toasted and crispy. Transfer roasted vegetables and chicken to a large warmed serving platter. Allow chicken to rest for 5 to 10 minutes. While resting, scrape the remaining pan drippings into a small bowl. Stir in the lemon juice, and season to taste with salt and pepper. Spoon sauce over the chicken and vegetables, serve with lemon wedges on the side.

If you have the time, season the chicken with the thyme, paprika, salt, and pepper, for at least an hour or up to 12 hours ahead of time. Pull seasoned chicken out of the fridge and allow it to come to room temperature for an hour before roasting.

As usual, this recipe offers plenty of room for adding your own culinary flair. Instead of the thyme and paprika, try seasoning the chicken with a dried Herbs de Provence blend. Other herbs or spices that would work would be sage, ground coriander, fennel seed, Za'atar blend, Aleppo pepper, or sumac. Have fun. To the roasted vegetables, you could also add parsnips or carrots, cut about the same thickness as the potatoes. Instead of the sweet yellow onion, you could try this with whole scallions, or strips of young leeks.

Recently, I served this delightful dish with a simple green salad dressed with a bright Dijon vinaigrette on the side, and a chilled bottle of French rosé to drink. Cue up Édith Piaf singing "Non, je ne regrette rien" and for a moment be transported to a perfect Parisian bistro. Bon appétit! Enjoy.