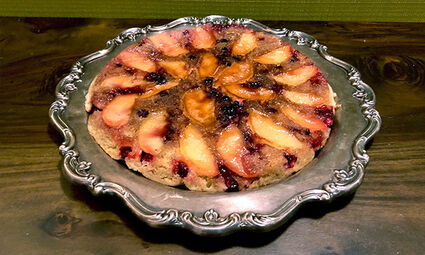 Since moving to Waitsburg, we have been slowly remodeling our older home one room at a time. Finally, the end is in sight with the biggest project, a planned complete overhaul of our kitchen, scheduled for later this year. In anticipation of this, we have been getting by with the aging components of our current kitchen, making piecemeal repairs to buy us time until we eventually replace everything. Lately, it seems that as soon as we fix one problem the next one pops up. First, it was the dishwasher that was on the fritz. As soon as we got it back and running, the garbage disposal failed. Once that was repaired, less than a week went by before the oven, which might be older than me, went out with an actual bang. Yikes!

So, for the time being, any recipe testing that involves the oven will be (pun intended) on the back burner. Thankfully, I came across an interesting recipe for skillet cakes that are cooked on the stovetop. By covering the pan with a lid, the cake cooks with steam resulting in a velvety soft texture, a cross between a Dutch baby and English steamed puddings. Here, apples, cranberries and a simple caramel sauce are started in the pan before the batter is added, creating a scrumptious upside-down cake, perfect for entertaining.

Zest of one lemon

2 apples, such as Granny Smith or Golden Delicious

First, prepare the batter. In a large mixing bowl, add the lemon zest to ¼ cup of the sugar. Whisk the zest around to release oils into the sugar. Add eggs and whisk until creamy, then pour in the oil, whisking to incorporate. Next, whisk in the yogurt and vanilla until combined. Mix in the flour, baking powder, and salt, just until a smooth batter forms. Set aside.

Peel and core the apples, and slice them into ¼-inch thick slices.

In a heavy-bottomed 10-inch cast-iron skillet, melt butter over medium heat. Add the remaining ⅓ cup sugar with a pinch of salt and continue to cook, stirring frequently with a wooden spoon, until sugar dissolves and turns a rich caramel color. Be careful not to burn! Remove pan from the heat, and decoratively arrange the apple slices over the caramel. If using the cranberries, arrange them to fill in the gaps between the apple slices. Over the fruit sprinkle the cinnamon, ginger, and nutmeg.

Next, pour the batter over the top of the fruit, and gently spread evenly with a rubber spatula. Place skillet over low heat and cover with lid. Cook for 20 to 25 minutes, until the cake is set, and a toothpick inserted in the center comes out clean, or a thermometer reads at least 180 degrees.

Take off the heat and allow to rest for 5 to 10 minutes. Place a large serving platter over the skillet, carefully and quickly flip and invert the cake out. Serve warm.

This cake recipe can be easily adjusted to feature various fruit combinations. Instead of apples try it with pears. In the summer, fresh plums and peaches would be fantastic. Instead of cranberries try adding cherries or chopped nuts. Dried fruits or fresh figs would be divine. Pineapple or banana would create a tropical flair.

This delightful cake makes a light dessert, served warm with a scoop of vanilla ice cream. Try serving it with a brunch spread as an alternative to pancakes or waffles. Also, lovely as a sweet treat as part of a tea service.