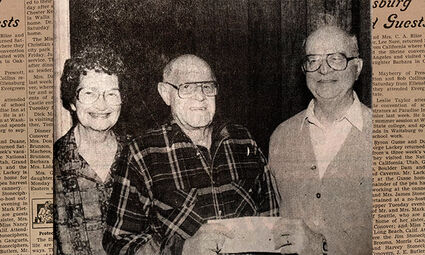 Recalling the grace-under-pressure composure WP Cardinals Quarterback Zach Bartlow displayed in his team’s climb to the title game last football season, it seems hard to believe that he was afraid of being a football player at one time. It was back in fifth grade. He was just a few days too old to stay with the Little Giants, the team he’d played for since third grade. So, he became one of the youngest and smallest players on the Big Giants. “I was scared,” he said, explaining that the big eighth graders on the other teams were pretty foreboding. “That wasn’t a good year for me.”

[Photo Caption] Ken and Jan Zuger accept a certificate representing the hog they won in a benefit raffle held by the Columbia County Regional Health Foundation. The Hog was donated by Mead Ranch of Dayton.

E. W. Truitt, owner of Lyon’s Ferry telephones that the ice is out of the river and the ferry is again in operation. The best road, he stated, is by Dayton, Delaney and Starbuck as the other road is in bad shape.

Mr. and Mrs. Grant Mays entertained about 90 friends at their home at a dancing party the last of the week. A basket lunch was served.

Miss Margaret Zuger returned home last week from Pullman, where she has been visiting friends for several days.

The Rebekah Sisters gave a very enjoyable entertainment on Tuesday night of this week. After the program was rendered, all repaired to the Armory Hall where a bountiful supper on a table the entire length of the hall, was spread. During supper a phonograph was turned loose and dispersed music for several minutes.

Invitations are out announcing the marriage of Miss Sadie Bolter of Dixie to Mr. Charles H. Rader on Tuesday, February 23.