By Paul Ocker5
The Times 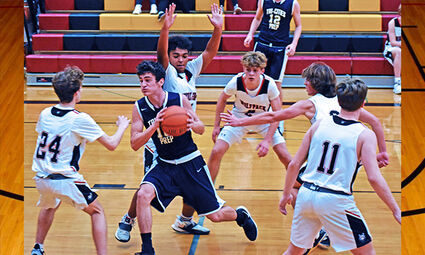 Far left: TCP's Justin White (10) moves past DW's Keon Lindley (32), attempting to make it past a wall of DW players

On Saturday, the Dayton Waitsburg Boys basketball team played a solid game, showing their toughness and resolve against the larger and taller Tri-City Prep Jaguars. They frustrated TCP in the first half with solid defense, holding them to only 16 points and outscoring them in the second period. However, TCP came out hot in the second half with 18 points, and the Wolfpack had a hard time matching it. After a well-fought game, Dylan Bledsoe had 16 points in the second half, and Monte Pettichord contributed another 8.