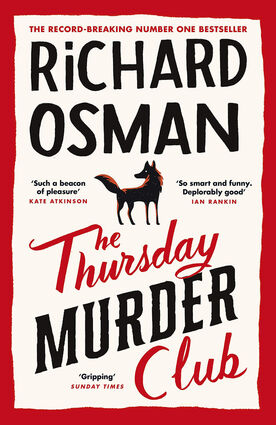 The Thursday Murder Club: A Novel

Meeting in the Jigsaw Room at a retirement village, four friends take up the tradition of amateur sleuths in murder mysteries.

It does become apparent that each brings their own strengths and experience to their work. Elizabeth is the founder of the group and digs through cold cases from the files of her friend, Penny Gray, a former police officer who is in a coma at the village’s nursing home. Joyce is a retired nurse who serves as the principal chronicler of their cases.

Joining the two women are Ibrahim Arif and Ron Ritchie. Ibrahim is a retired psychiatrist who has an incredible ability to recall details. Ron is the wildcard, a troublemaker who was once a political activist.

A young police constable, Donna De Freitas, is invited to the jigsaw room to talk about safety. The four septuagenarians decide to help her by using their influence to get her on the case of a murder in the village. From here, the four race to solve the case before the police. There are enough mysteries and secrets about the four club members to ensure continuity in the sequels.

The Man Who Died Twice: A Thursday Murder Club mystery

This is the second book of the series by Richard Osman. The four friends are still busy looking for answers to secrets. Elizabeth’s past as an MI5 spy brings the group into danger, just what they like.

This story deals with vulnerability and revenge. Things are much more personal than last time. The man who died twice only lived once and was married to Elizabeth. Douglas is chaotic and reckless, not great traits for a spy. He brings his mess, along with a handler, Penny, to the retirement village. He hopes to hide out, weather a storm of his making and eventually be able to run off with stolen diamonds.

At the same time, Ibrahim steps out of his guarded life to become engaged with the world. He goes for coffee, sits in a bookshop to read and buy books, uses a smartphone to pay for parking, and does not react with fear when confronted by surly teens. The last bit is what pushes the four into a game of revenge.

These books are not the gritty mysteries I usually read. Not dark or Norwegian, these books are lighter, with entertaining characters and British quirkiness.