Candidates for Dayton City Council and for the Dayton School District 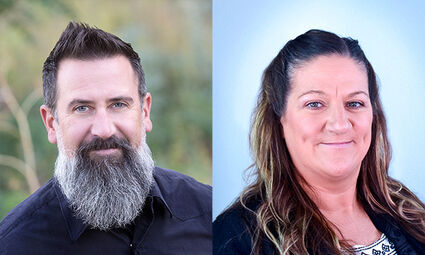 DAYTON-Several candidates are running for a position on the Dayton City Council, including one write-in candidate.

Laura Aukerman and Boe Stevenson will face off for Position 1, a four-year term on the Dayton City Council.

Aukerman calls herself a critical thinker. With a thirty-year career in the nuclear industry under her belt, she says she knows how government processes work, and how and when they don't. She thinks it is very important to look at issues, utilize all the facts and data, gather feedback and involvement from stakeholders and then determine the best path forward.

The biggest challenge facing the City is managing city funds wisely, something she said she knows how to do.

Aukerman, and her daughter Paige, are successful owners of Paige's Floral a small downtown business in Dayton. Previously, Aukerman managed a budget while working for a subcontractor to the Department of Energy.

"Fiscal policy is a must and we need to adjust our spending and re-evaluate our tax rates to encourage and ensure responsible growth for Dayton," Aukerman said.

Regulatory requirements, associated costs, and working with other interested parties on the City's proposed Wastewater Treatment Facility project is also challenging, but Aukerman is confident this can all be worked through.

Aukerman said she would like to see more cohesiveness among Dayton citizens and organizations and if she is elected, she can help make that happen.

"Throughout my years of employment, it was very important to develop teams that not only performed their skills with knowledge and expertise through education and training, but I also had to ensure a team environment," she said.

"Although most of our Country is divided does not mean Dayton needs to be," she said. "We have a lot of competent and smart people in our community, and if we can all work together, we can accomplish a lot."

Aukerman thinks the time is not right for the proposed Touchet River Trail, but the time is right for high-speed Broadband Internet Service in the community. They are projects currently in progress through the Port of Columbia.

Boe Stevenson, owner of Designs by Boe, is running as a small business owner who recognizes many of the hurdles of small-town life.

"The biggest challenge in my opinion is the City's ability to not only sustain, but to thrive financially. Anticipating the needs of our community and planning for those needs is paramount. In order to grow, we need to look to the future while learning from the past," he said.

Stevenson said there is a simple reason for running for a seat on the city council and that is because as a member of a younger generation he will bring a fresh perspective to the Dayton City Council.

"My open mindedness and ability to truly listen to both sides of a debated topic is a relevant trait I possess," he said.

With regard to Broadband Internet Services, Stevenson said, "Technology is ever-evolving and we will inevitably be left in the dust if we choose to not take advantage of the opportunity that is upon us, now."

He said connectivity comes to mind also when he thinks of the Touchet River Trail project.

"Personally, I have seen nothing but positivity in regards to the addition of trails, especially in rural communities," he said. "The River's Edge Trail in Great Falls, Montana, my home town was strongly opposed for several years until it was finally put in place. It has been a huge success and embraced by the community for decades."

"We have an opportunity that needs to be taken advantage of," he said.

Teeny McMunn running against Cindi John for Position 3 on the city council, a four-year term.

McMunn said she believes in thoughtful growth in the city.

"Empty buildings need to be filled, but first we need to be able to have housing available," she said.

One of the biggest challenges for the city is the need for more affordable and low-income housing and McMunn hopes she can help the Council as they move forward with that. She also welcomes high speed Broadband Internet Service to the community as crucial to expanding business in the city.

She said she would like to see the city move forward with the same energy the Dayton Task Force had twenty years ago when Main Street was revitalized.

"I think the Council can best be served with someone who is positive, yet can listen to many points of view," said McMunn.

McMunn said she has managed budgets and handled the bookkeeping in two co-owned businesses. Until the first of this year, she was employed by The Times newspaper as the advertising and office manager.

"The City of Dayton is a business with income and expenses like any business. I believe I can help with decision making on the council," she said.

Vicki Zoller has tossed her hat into the ring as a write-in candidate for Position 5 on the Dayton City Council, going up against Marchand Hovrud for this four-year term.

Zoller believes she is the better candidate, mainly because she "shows up".

"I think that people that are seeking leadership positions in our community should show up. They should volunteer, serve on boards and committees and be plugged in to what is happening at the grassroots level in their community," Zoller said.

Zoller said the biggest challenge facing the city is finding healthy ways to grow the local economy and tax base. She said finding innovative ways to invite new home and business owners into the community will increase the shrinking tax base. The Broadband Internet Services project, efforts to create affordable housing, utilizing business incentives, and other creative planning needs to continue.

"I see solutions where others only see problems." Zoller said. "It doesn't take much to point out what is broken, but takes commitment and a willingness to stay in the fight to get things fixed, a willingness to be a part of creating positive action. I'm grateful to live in a town where that commitment is seen everyday by so many of our locals, including the sitting members of our city council. I don't have any promises to make you, if I'm elected. Those often feel like empty words. I do my best every day and that won't change regardless of this election."

Zoller chairs the Blue Mountain Station Co-op, the Friends of the Dayton Community Pool, and Columbia County Community Network. She and her husband have lived in Dayton for six years.

The incumbent Fred Crowe is facing off against Tyler Dieu for Position No. 7, a four-year term on the Dayton City Council.

Since he was appointed to the city council six months ago, Crowe said he has had ample time to familiarize himself with the diverse aspects of complex city business.

City Council positions should not be political, Crowe said, and councilors need to work with the mayor and the public to identify and address issues that can only be solved through teamwork and cooperation.

Dayton must diversify and expand its business offerings beyond what it currently has, he said. Developing new internet broadband infrastructure will attract new businesses and make all businesses in Dayton more competitive in the outside world. That, in turn, will improve city services, the schools, and other aspects of life in Dayton.

"Although retired, I have extensive past working experience with multiple budgets, contracts, and grants and have worked with diverse committees to accomplish common goals. I have a strong vision that Dayton can make progress in spite of many challenges," he said.

Crowe served as a commissioner for the Port of Columbia from 2014 to 2020. He is an active member of the Dayton Chapter of Kiwanis, occasionally volunteers at The Club, and has been a past TVAC board member.

Cindi John, Marchand Hovrud and Tyler Dieu did not respond to multiple requests for an interview. Their campaign information can be found in the Columbia County Official Voters' Pamphlet.

Korinda Wallace is running against incumbent David Bailey for his seat on the Dayton School District Board of Directors.

Aneesha Dieu and Anna Berg are on the ballot for Position No. 4 on the Dayton school board.

Anna Berg is no longer interested in serving on the board of directors. She said she missed the deadline to withdraw from the election. If elected, she will resign and the board will need to appoint another person to the position.

Wallace, Bailey, and Dieu did not respond to requests for an interview. Their campaign information can be found in the Columbia County Official Voter's Pamphlet.