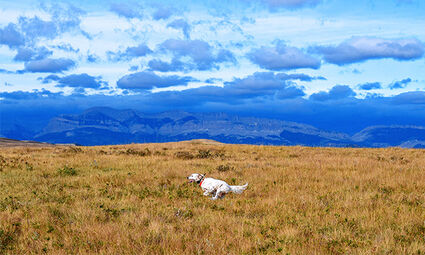 Llewellin setter Finnigan runs the vast plains of the Rocky Mountain Front. Read the October edition of Palouse Outdoors on Page 7 to learn more about Finnigan's adventures and grassland conservation

The early golden hour bathed the landscape in a peachy hue as the setters and I stood by the truck. It was somewhere around day number 200 that I had set foot on the grasslands between Waitsburg and Minnesota since 2011. This day, we would embark on the Sheyenne National Grasslands in North Dakota. Sharp-tailed grouse were beginning to stir somewhere in the expanse before us.

We were north of the Sheyenne River in an area where it was safe to hunt sharp-tails. Endangered Species Act-protected lesser prairie chickens were found south of the river. While I cannot recall if it was even legal t...