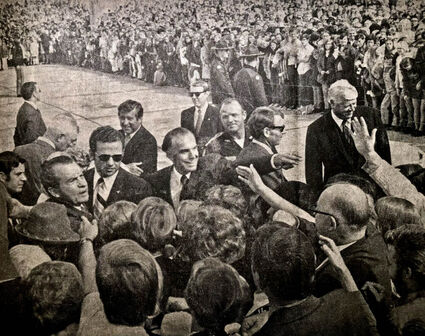 The Waitsburg City Council last Wednesday night voted 4-1 in favor of enacting a new ordinance that will give the city the ability to shut off city utilities to citizens who don’t pay bills or violate the nuisance codes. This new way to handle violators should help the city enforce its rules better, said Randy Hinchliffe, the city’s clerk-treasurer. In the past, the city would give citizens a ticket if they didn’t follow the rules, but the Sheriff’s Office and the city had trouble following through.

The modest increase in salmon bake ticket price made a positive difference financially for the Waitsburg Commercial Club, and it also didn’t seem to discourage any of the salmon lovers who trek to the annual event, either. A total of 1,044 people were served 1,100 pounds of salmon, according to Ivan Keve, Commercial Club secretary-treasurer pro tem at the group’s first meeting of the season last Tuesday night at Ye Towne Hall. The number was nearly 100 more than 1995’s 957, he said. Gross receipts were estimated near $12,375 compared to $9,320 in 1995. The business-boosting group also voted a pledge of $500 to the Waitsburg Lions Club, which contributes manpower and the use of facilities for the event.

Spiro Agnew was a great help to Jim Hubbard of Waitsburg – and the Vice-President was not even aware of it. Jim went to Walla Walla early to get a front row seat for the President’s visit. As Mr. Nixon went down the row of people, shaking hands, he pointed to Jim’s Spiro Agnew T-shirt and indicated that he wanted to shake the hand of the owner. Not only did the President shake with Jim, he also poked a friendly index finger in Jim’s shirt. We understand that he hasn’t washed his hand or his shirt since both bear the impression of this famous person.

[Photo caption] The Walla Walla City-County Airport was amply crowded for the President’s visit last Sunday. This shot shows Mr. Nixon shaking hands with some of his local fans. Above Mr. Nixon’s head is Lorn Proctor, Mayor of Walla Walla. Gov. Daniel J. Evans is in the center of the picture while Rep. Stewart Bledsoe is above and to the left of the Governor. Harold Hansen of Waitsburg is above and to the right of Gov. Evans, flanked by men of the Secret Service – five of them visible in this photo.

Two daughters and a son were born Sunday, Sept. 29 to Mr. and Mrs. Fred Zuger in the Brining Hospital in Dayton. They have been named Margaret Ann, Charles Joseph, and Marie Louise.

Apple harvest is under full swing in the Walla Walla and Touchet Valleys now, and the packing houses have on practically full crews. The Schiltz orchard near Huntsville has a crew of 45 or more people, including the pickers and the packers.

Mrs. Bruce Abbey visited overnight in Dayton with her mother, Mrs. Wm. Mosgrove. They went to Walla Walla to attend the funeral of little Virginia Routh who was run over by a truck. Mrs. Abbey and Ms. Routh formerly traveled together in a theatrical company.

Complaint is made by the Milton Eagle that nails in the sidewalks are injuring the feet of the town cows.

On Monday morning our public school opened with a full corps of teachers and 175 pupils – Prof. Hultsch the new principal, seems to be the right man in the right place and is ably assisted by Miss Ollie Parker, Miss Addie Dickinson, Miss Julia Blackburn, Miss Alva Kruchek and Miss Mary Ramseur.

Two pumpkins were brought into town Monday from Rose Glen Farm – one weighing 162 ½ pounds and the other weighing 155 pounds.

The 15-months old child of O. M. Conover was badly scalded about the face one day this week. At last accounts the baby was some better and it is thought that the scald will probably not leave a scar although this skin is all coming off the face.