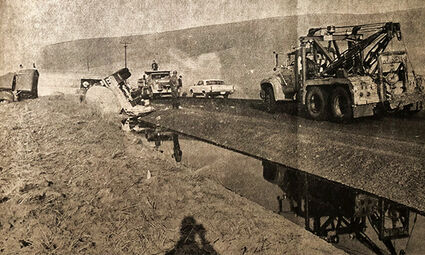 It was a day of Victorian fashion, museum tours, buffalo, corn on the cob and Butlers at Waitsburg’s Fall Festival on Sunday. The attendance was anything but sparse. The community filled benches and wooden chairs on the front lawn of the Bruce Memorial Museum for a church service. Pastor Mike Ferrians, dressed as though he were from the old west in a long black coat and hat, led the congregants in singing traditional hymns and spoke about an old-fashioned farm tool he had.

Sometime during the past school year, a student approached Dr. Carol Clarke about an offensive text message the girl received on her cell phone. Clarke asked if the student recognized the number. She did not, so Clarke asked her permission to try the number and when she did, another student answered his phone in class and the mystery was solved. Clarke called in the caller’s parents, informed them about the incident and the parents took the phone away. If the Waitsburg School Board adopts a proposed new policy regarding the use of “telecommunications devises,” the district itself will have the right to take away a cell phone.

Historical Society members met Monday night and reviewed the Fall Festival. Although the weather left something to be desired, it was a very successful day. Some changes in the wiring will have to be made in order to accommodate various freezers, coffee urns and other appliances using electricity. A roofer from Tri-Cities has examined the roof of the Bruce House and another from Walla Walla will look it over this week. No bids have come in as yet. The Board approved the request of Dan McKinley and Greg Leid to build a winter shelter for their horses at the Mill. Some time was spent reminiscing about the past 25 years existence of the Historical Society and the first Fall Festival held in 1972. The first one was to be a “thank you” to the public for their support and 1997 will be the 25th Thank You!

[Photo Caption] Sixty-six hundred gallons of road topping oil found a new home in this barrow pit alongside highway 24 just a few miles west of Prescott. It came from the tanker rig at the left of the picture which turned over after going out of control on a curve. The hot (240 degrees) and sticky black liquid formed a mirror-like surface in which the arriving wrecker may be seen in near-perfect replica. Damage to the rig in the early Sunday morning accident was estimated at $27,000.

Monesa Grant, a member of the Prescott Barnyard 4-H Club, received her second award for exhibiting the champion beef carcass at the Southeastern Washington Fair this year. Monesa received the trophy for champion beef carcass from Carl Nordheim, Waitsburg, sponsor of the award. She was one of ten exhibitors who had steers qualifying for Steer of Merit. The 4-h and FFA steers are judged after slaughter, and the most desirable carcass is selected. In addition, carcasses that meet the requirements are recognized as Steers of Merit.

Laurence O. “Larry” Broom was taken to the isolation ward of St. Mary Hospital last Thursday afternoon with polio myelitis after being ill for a week at his home.

At an afternoon ceremony at 2 o’clock on Saturday, Sept. 21 in the Methodist Church, Miss Barbara Ann Sweazy became the bride of William H. Payne.

Mary Hirsch, Velma Mock and Barbara Blize left this week for Seattle to attend school at the University of Washington.

Kenneth Jones won first prize in the annual pet parade Saturday with his crow. Second place went to Sereta Patton as Bo Peep with her dog.

The Touchet Milling Co. of Huntsville has recently been reorganized and the capital stock of the concern greatly increased by the addition of new capital. Morris Woods was elected president, Chester Keiser vice president, and E. S. Isaacs, secretary and manager.

Frank Neace has rented his farm to Garl Brunson. Mr. Brunson bought the farming outfit and will take possession this fall. Mr. Neace and family expect to spend the winter in California.

Francis Artz and Wesley Schmitt left last week for Salem, Or. where they will attend the Willamette College which opens Sept. 19th.

A surprise was given Mrs. E. D. Mills on Tuesday. The occasion being her birthday. About twenty of her most intimate friends were present and a very enjoyable times was had.

Prof. Pickering, an American Astronomer, has discovered a watery vapor sticking out around the edges of the moon which seems to him to indicate a possibility that that side of our satellite which we never see may possibly be a well-watered country and inhabited.