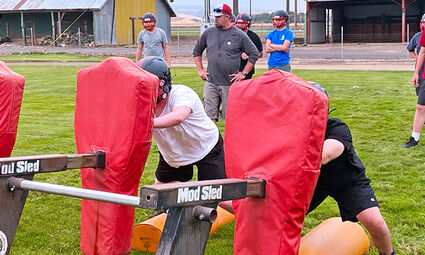 Wolfpack Football began practice in August. Practices have been temporarily canceled, while athletes recover from COVID-19.

DAYTON/WAITSBURG-Hut, hut, hike! Fall sports are officially underway from Dayton-Waitsburg Wolfpack athletes. Full rosters for both volleyball and football teams have given athletic officials high hopes for the upcoming season.

Wolfpack Football had more than 30 players turnout at the first practice of the season on August 18, with numbers continuing to climb as late registrations rolled in. Athletic Director Sam Korslund said that those numbers provided the strong potential for a junior varsity team. Paired with the revival of the middle school football team, Korslund said that the JV tea...