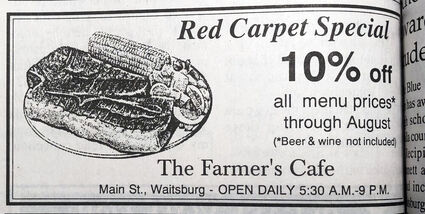 Seattle-area residents who tuned into their local National Public Radio affiliate this week were introduced to none other than Waitsburg’s Bret Moser, Jim German, Claire Johnston and Jack Miller. Seattle-based KUOW focused on Waitsburg in a second segment about the so-called “Cascade Curtain,” a physical, and some would say cultural and political, divide between the west and east sides of the Cascade Mountains. In his show “Waitsburg: When East Meets West,” reporter Dominic Black explores the impact of change, specifically west side residents moving to town, on this small rural community.

The Waitsburg High School Class of 1986 held its 10-year reunion the weekend of Aug. 2-4. Attending were Dawn Keith Breitenstein, Debbie Penner Fortner, Rob Fry, Gennie Adams, Dean Perry, Brenda Gales Groom, Wendy Davis Richards, Scott Bowles, Margret Hagerman and Bobbie Jo Wilder Vandel. The reunion included a get-together at a Walla Walla pub Aug. 2, an Elks Club dinner Aug. 3 and a Sunday picnic at Pioneer Park. The class had hoped to picnic in Preston Park but opted not to because of its condition following the flood.

Mrs. Gladys Keve has just returned from a trip to Portland where she joined her sister and brother-in-law Mr. and Mrs. Sam Wolsborn and their daughter, Maryann Wolsborn, 13, for a trip to Kansas City, Mo. While in Kansas City, Maryann competed in and won the title of “National Strutting Champion” in competition with more than 200 young women. The Floyd Light Middle School eighth-grader, has been marching and twirling the baton for four years.

Among several area residents receiving degrees in the graduation ceremonies at Walla Walla College was Beverly Gage Erwin (Mrs. James) of Prescott. Mrs. Erwin received a Master of Education degree. Her Bachelor of Science degree is from Washington State College. In the past, Mrs. Erwin has served as librarian and taught English at Prescott school and will be teaching in the same position when school opens Aug. 30.

Donna Jeremiah will attend Washington State College on a scholarship which was awarded to her as valedictorian of her class last spring.

Mrs. Mary E. Murphy died at the farm home of her son, Oscar Abbey, north of this city, Saturday, August 13 after an illness of several weeks.

The home of Judge Grubbe was a scene of a family reunion on Tuesday of this week, the occasion being the 73rd birthday of the Judge. Mrs. Lulu Stirling arrived home from the east, Evan Grubbe and family of Prescott and the family of Mr. and Mrs. I. D. Casey completed the reunion.

Mr. and Mrs. Walter Price gave a lawn party at their home in honor of their son Harold’s twelfth birthday, Tuesday, Aug. 17. There were 17 present and after playing numerous games, ice cream and cake, and strawberries were served.

A pleasant feature observed during this harvest is farmers coming to town for more sacks.

Goldsmith Hammer, with his threshing outfit and crew, started for the Palouse country this morning. Threshing is a good deal later there than here although not so much this year as usual.

J. D. Bower of Dayton will visit this city on Tuesdays and Saturdays with ice, which he will deliver in any part of the city at one cent per pound. Orders may be left at the Bradley House.