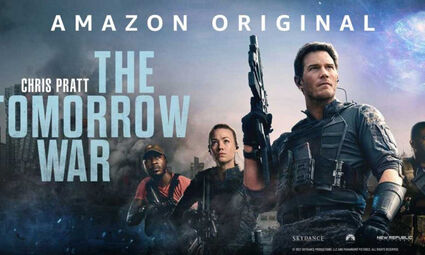 A former soldier turned high school teacher, Dan Forester just wanted to watch a soccer game after receiving less-than-pleasant news in the year 2022. With his young daughter, Muri, snuggled closely, Dan is shocked as he watches armed soldiers appear out of a wormhole, onto the field.

"We are you, thirty years in the future. We are fighting a war, our enemy is not human, and we are losing in eleven months time."

Global leaders initiate the first-ever worldwide draft, sending civilians into the future- with a return rate of less than 20%. The present world is in complete chaos, as kids lose interest in school, riots and protests erupt across the globe, and families fear the moment that a parent, sibling, or grandparents gets the alert that they have been selected for the draft. Within a few short months of the soldiers landing on the soccer field, Dan gets his selection notice.

In the ultimate fight for humanity, Dan jumps forward thirty years to fight against the Whitespikes, where he connects with some very unexpected faces, forms unbreakable bonds, and sets out to right some heavy wrongs. The enemy is strong, and the world so broken, that all soldiers are jumped to the future with no idea of what they are getting into.

The weight of the world quite literally on his shoulders, Dan has to choose between right and wrong, separating the emotion of being a father from the unfathomable task he's been given as a soldier.

While dystopian war movies are not my go-to, I was excited to see something new and original pop up. This movie jumps between the present and the future, and paints an apocalyptic picture that has yet to be on the big screen.

The Tomorrow War draws inspiration from some of the most-discussed conspiracy theories, including the Hollow Earth Theory, existence of aliens, and more. The movie is rated PG-13, and, as it is a war movie, has a lot of violence, loud noises, and a 9/10 jump factor. The cast features names like Chris Pratt (Jurassic World), Yvonne Strahovski (Handmaid'sTale), and J.K Simmons (Spiderman). The movie is available for streaming exclusively on Amazon Prime.