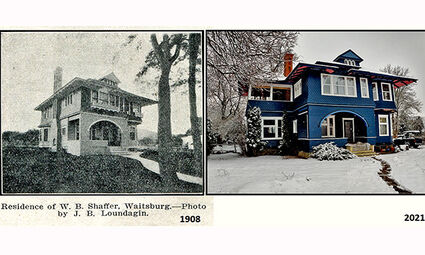 Side by side images of the Shaffer House on the left in 1908 and as it is now as the Bond/Donohue Home.

Remodels, updates, and personal touches are some of the most exciting parts of owning your home, but can also be some of the most intimidating and overwhelming. As part of a special home and garden edition, The Times reached out to local homeowners about their homes, remodel efforts, and remodeling experiences.

Bruce Donohue and Allison Bond took on one of the biggest of historical houses in town. The house was recently painted a beautiful blue with unexpected trim colors that make this home a showstopper.

A. -The Shaffer House was built in 1905, by Ida Mae Russell Shaffer and William B. Shaffer. Other owners have been Mr. and Mrs. Harvey Estes, Mr. and Mrs. Walter White, and Mr. and Mrs. Norman Lybecker.

The current residents are Allison Bond and Bruce Donohue.

A.-We bought the place on December 20th, of 2010, and we started remodeling on December 21st. The fireplaces and the chimneys were first, followed quickly by the plumbing as the mainline ruptured leaving us with a geyser coming from the rock wall in the basement.That was soon followed by electrical anomalies, and we have been working on the house, continuously, ever since.

Q.-When did the project end?

It is difficult to separate the necessities of new plumbing and wiring, from the cosmetic choices that we have made. However, removing the decades of wallpaper was literally peeling back time, and what we found was that the original owners had made the same choices that we were making.That was very gratifying. Then stripping the Grey-Pink paint (we called spleen) from the woodwork, that had been added years after the Shaffers, and seeing the original, beautiful wood, well that was simply magnificent. It was the most expensive thing we did, it cleaned out our coffers more than once, but we are so glad that we followed through.

A.-For that much money, we could have been living like Kings in a forgotten part of the world.

A.-All of them.  It's hard to get people out here to work.

Q.­-Any advice to those looking at a similar undertaking?

Owners Paul and Karen Gregutt have created a stunning cottage home surrounded by trees and a beautiful garden.

A.­-One of Waitsburgs original farmhouses which we bought in 2005. Bettie Chase showed us a wedding invitation from this address dated 1875.

Q.-When did you complete the remodel?

A.-We like to say, "on the tenth of never." We just re-remodeled the bathroom.

Q.-The best thing you did in the remodel project?

A.-We built a wrap-around porch to tie the house together and create a much used outdoor living space. We also took out the lowered ceilings which were not original This allowed us to replace windows in the original style.

Q.-The thing you regret most about the project?

A.-Not being here for some of the important work.

A.-Lemer Electric came through to fix subpar electrical work done when we were not on site. We have used them on multiple projects and highly recommend them.

A.-When looking at buying a fixer upper, look at the land and location, with regards to the house remember anything can be ripped out!

Susan Donegan rescued this house originally built in 1885. It is a trick to take an older home and keep its history while bringing it into the present. It is sophisticated in its design and color palette. Her front yard landascaping highlights a variety of garden plants that fill the space instead of lawn.

A.-Small city lot on W. 4th street, purchased in 2014 in very sad disrepair, both the house and the yard. From a county deed search the house dates to 1885. According to the contractor for my renovation, it appears to be two old cabins which were merged into one home.

A.-Fall 2014 – starting with removal of old landscaping for access and to lift the home up for addition of a foundation

A.-Moved into new home April of 2015, exterior didn't get painted until May/June

A.-Kept the historic exterior appearance; screening-in my front porch where I hang-out all summer; spent most of my budget on the bathroom and the kitchen, where I spend most of my time; raised the ceiling to cathedral height in the newly added 100 square feet of living room.

A.-Not adding another 60 square feet so I could keep my baby grand piano; not expanding the root cellar when building out the foundation to provide more storage space

A.-Allen Ketelsen, Ketelsen Construction of Walla Walla– he has a passion for old houses

A.-As the saying goes, double your budget and triple the time estimate – but to own a home with an interior custom designed to suit me perfectly was worth every dollar. Having such a wonderful space to quarantine in these past 12 months was very good for my mental health!

In 2015, The Times publisher Lane Gwinn, bought one of the empty builsdings on Main Street. A lot to learn when the remodel is almost 6,000 sq. ft. of blank canvas. It now houses Ten Ton Coffee and The Times offices.

A.-The Fender building on Main Street in Waitsburg, built in 1907 by the Fender brothers. I bought the building in 2015

Q.­-When did you start your remodel?

A.-Pretty much immediately, 2015, the place was gutted and ready to go.

A.-The majority of the work was finished in 2016, with a large living loft upstairs and a printmaking shop downstairs. In 2018, I decided to create Ten Ton Coffee on the ground floor. Now I am putting The Times office in the back of the shop. End?

A.-Putting the large glass roll-up door in the front. After the pandemic hit, we were able to use the door as the world's largest to-go window. It allowed us to keep the town caffeinated until we were able to open for indoor seating.

A.-Not putting a dumbwaiter in, I wanted to have a way for coffee and a scone to be delivered to the loft upstairs. It is still on my to-do list.

A.-Tim Wert at Kettleson Construction, was my contractor and saved me time, money and my sanity on a large project I had no experience or business taking on. He made it a success and taught me how to make decisions!

Be clear about what you are going to use the building for. Ask others who they have worked with and if you have never done anything like it before, consider a contractor. They will make sure things get done right the first time.

Remember to have fun.