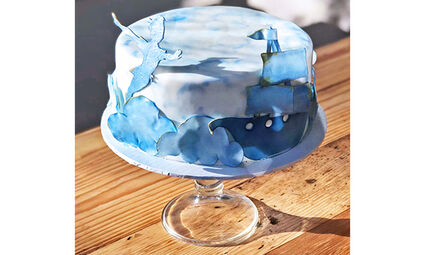 If you've had the pleasure to walk into Locally Nourished, the coffee shop and eatery at 217 East Main Street in Dayton, you've had the opportunity to enjoy some of Danielle Barnes' kitchen expertise. She's the owner of Decadent in Dayton, one of our up-and-coming businesses.

Danielle moved to Dayton in June last year, but she has known Alicia Walker, owner of Locally Nourished, for many years. The decision to make the Touchet Valley move was based on the new partnership she forged with Alicia, and we're all the better for it - everything from soups and quiche to mouth-watering pastry. But her baking skills are her forte.

"I'm the youngest of nine kids, and I'm a twin," Barnes said during a recent chat. "It was farm life - everyone learned the chores, and I learned how to cook."

At 15, she got a job handing out grocery store samples. Someone saw her potential, and she got pulled in to assist in the bakery. Later she began working at Costco and eventually found herself featured in the company magazine. Altogether, she put in 18 years as one of Costco's top bakers and cake decorators. She's self-taught, which is impressive if you've seen the things she does. Eight years ago, she made the final casting call on the TLC Network's "Next Great Baker." At that time, she was considered one of the top 100 best bakers in America.

"They start looking for personality first and baking talent later," she said, which made me laugh. Television!

She used to call her special-order business "Danielle's Decadent Desserts," but moving to Dayton means a new start for her and the business. Thus, the name change.

"When I first visited Dayton, I fell in love," Barnes said. "People here have been so great. They've welcomed me, and I'm extremely grateful for the reception," Barnes said. "I plan to make my life here. Your community becomes your family."

There are two ways to look at small business these days - as a tough row to hoe or as a timely opportunity. Danielle sees it as the latter.

As owner of "Decadent in Dayton," Danielle operates under the umbrella of Locally Nourished with a goal to set up her own storefront on Main Street in Dayton. Besides selling her baked goods, she envisions selling top-shelf baking and pastry art supplies and offering classes for folks interested in learning baking skills. Right now, she and Alicia are working on setting up a refrigerated display of baked goods for take-out at Locally Nourished.

Meanwhile, she takes orders for special event cakes and pastries. She's a bonafide sugar worker, cake sculptress, and supreme gluten-free baker. She can also do sugar-free products with advanced notice.

Her signature product is Decadent Chocolate-Orange Cake. It sounds simple, and I won't try to describe how she makes it. Suffice it to say, not only does it sound heavenly and look extravagantly fetching in photos, but I also found myself drooling just thinking about it. I plan to bury myself in some before long. She's taking orders now for St. Patrick's Day bakes, truffle pops, cupcake bouquets, and more.

For your drooling pleasure, you can find photos of Danielle's work on her "Decadent in Dayton" Facebook page. Orders for her delectable deliciousness can be made by Facebook messenger, sending an email to dbcakes4u@gmail.com, or calling 425-395-9324.

Danielle Barnes is looking forward to the future of life and community business in the Touchet Valley.

"I hope I can complain about being tired," she said.

I know it sounds weird, but I think she will.