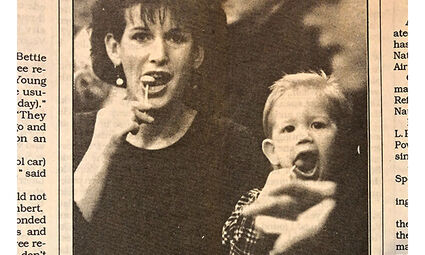 When dozens of well-wishers gathered to celebrate Sarah Lyman’s birthday at Booker Rest Home in Dayton on Saturday, they came not only to honor this longtime Dayton resident’s 100th birthday but to commemorate a century of Columbia County history.

[Photo caption] Waitsburg’s Kelly Zuger enjoys a lollipop with her 20-month-old son, Justin, Friday during a basketball game at the gym in Waitsburg.

It was a pretty good year for stock and bond investors, and people who bought Waitsburg School District bonds in 1993 have done fairly well. Some have made a profit of about 18 percent on their tax-free investment.

Columbia County Sheriff’s Department has purchased two used snowmobiles for crime-fighting and search and rescue operations. Columbia County Commissioners, using state grant money, approved the purchase of the Arctic Cat snowmobiles, a trailer, radios, and other gear for a total of $13,500.

Rev. Vernon Smith has been selected by the Commercial Club Board of Directors to serve as president for the 1971-72 club year. Don Thomas was selected as vice-president, and Ivan Keve was named to another term as secretary-treasurer.

Late reports from St. Mary’s Hospital on Jim Wood injured Wait-Hi teacher: X-rays indicate a chipped bone in the right wrist and a sprained ankle with no broken bones there. Jim, who was at first dazed from the concussion, is returning to normal enough to give the nurses a bad time, according to Lee Mantz, Jr.

While the art class was setting up a Christmas scene on the school lawn, one of the boys asked uncertainly, “where shall I put the three wise guys?”

John Hulce has purchased the Plaza Theatre equipment from the committee and has taken over the lease held by Earl Crossler.

The K&K Jewelry shop is being re-decorated this month, preparatory to reopening their business in the near future.

Mr. and Mrs. Stanley Seaton are leaving next week for an extended visit in Wyoming. They are taking their snow plane for experiment and showing.

S.A. Ferguson this week enlarged his hardware store by moving the partition between his store and workroom farther back. His is a very handsome store now.

Willie Weller and Archie Martin are not experts at breaking horses. On Thursday, they hitched a colt to a cart and proceeded to break not the colt, but the cart. No bones were broken, and the boys have regained consciousness. The colt is as if nothing happened.

Bert Preston has engaged in the bicycle business on a large scale and will establish agencies throughout the state.