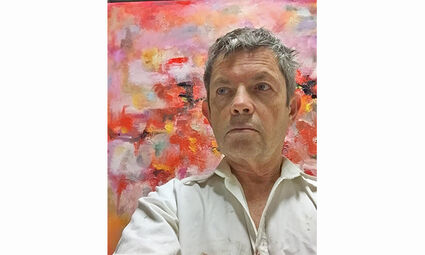 Laufer moved to California in the late 1970s and returned last year, settling in College Place. He uses two rooms in his house as his studio. Describing himself as a “late bloomer,” he started painting at the age of 40. Laufer said he felt internally that he wanted to paint, so he went to a paint store, opened up a tube of paint, smelled it, and put some on his finger. Laufer says it was at that moment that he knew he wanted to paint.

For 30 years, Laufer worked out of the studio of his mentor, Benjamin Blake. He developed his style through the painting process itself, and Blake was instrumental in Laufer’s training, which involved a lot of talking about painting—what was working and what wasn’t.

“This is how the painter hones their painting skills—painting, absorbing, listening,” Laufer says.

He does not try to make a statement with his painting or create idea art.

“It’s all about giving internal intuitive expression for me, and then the viewer completes the process with their own appreciation or identification.”

Laufer’s exhibit began on December 15 and runs through February 8, 2021. Through December, the gallery is open Monday through Thursday from 9 a.m. to 5 p.m. and Friday from 9 a.m. to 4 p.m., and by appointment.