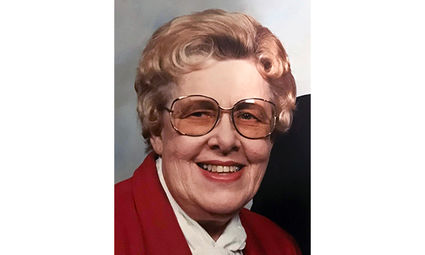 Arnella Nadine Magill Warren, "Nadine," passed away, at the age of 94, on November 16, 2020, at Booker Rest Home in Dayton, WA. Nadine was a Dayton native, born in November 1926. Her parents, Benjamin Magill and Anna Hatfield Magill, were also born in Dayton, WA. Nadine attended Star Country School and graduated from Dayton HS, class of 1944, during WWII.

She had two brothers, Rolla & Glen, who were 17 and 10 years older than her. After HS she attended Kinman Business College in Spokane. She returned to Dayton and worked as a secretary at the Green Giant Co. for several years. She was given the nickname "Pink" while working there.

At age 24, Nadine met her husband Bob, Ernest Robert Warren Jr, on a blind date. They were married one year later in Dayton and shared an additional 64 years together. They farmed in Dayton, growing grain, children, cats, dogs, chickens, flowers, gardens and cultivating many wonderful relationships with Dayton friends and family. Always busy on the farm, Nadine also cooked, baked and cared for the many harvest crews. Homemade German Chocolate cake was her specialty. She kept meticulous records as bookkeeper for Warren Farms for over 60 years.

Nadine spent her life involved in Dayton activities. She liked canning her garden produce, fishing, picking huckleberries, baking, playing cards, arranging flowers for church, and spending time in the mountains. She rode snowmobiles and was a founding member of the Blue Mountain Snowmobile Club. She was an active member of the Dayton First Christian Church, Cowbelles, Cattleman's, Neighborhood groups and her bridge club. As a mother and grandmother, Nadine hosted family Thanksgiving in her home for over 60 years. Huckleberry pies were another specialty from her extensive recipe collection.

Bob and Nadine were 1966 Cattleman of the Year for Columbia County and were proud to be wheat farmers and cattlemen. They enjoyed traveling the US to attend National Farm Conventions. Nadine encouraged all of her children's involvement with 4-H and FFA including helping her boys with their swine & beef projects and over 15 years' worth of trips to the Spokane Junior Livestock Show.

Nadine's family would like to extend thanks to Booker Rest Home's staff, who provided over 3.5 years of care for her and Walla Walla Community Hospice who teamed with Booker for Nadine's final 3 months of life.

A graveside service was held at the Dayton City Cemetery.

Memorial contributions may be made to the Dayton First Christian Church, Blue Mt Community Foundation, or your favorite charity.