The Cheshire Cat explains the differences 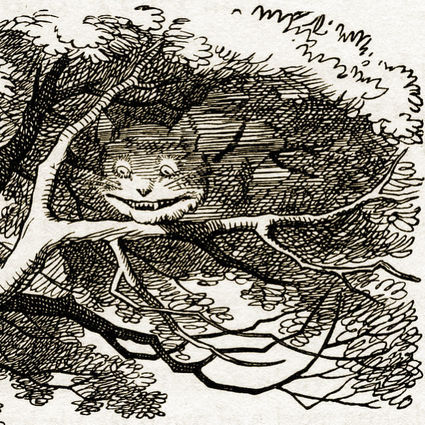 It’s a wet and windy afternoon in early November. I’m sprawled out on the sofa, and between my legs is a small blonde dog, flat on her back, legs up, ball in mouth, sound asleep. It occurs to me that this sort of blissed-out relaxation is one of the many things that dogs do differently than cats. Cats like to stretch, yawn, spread out, and chill, but at all times, they look poised, elegant, even regal. Dogs, on the other hand, look like they’ve just come home from an especially good kegger.

It’s commonly said that there are people who prefer cats and those who prefer dogs, but just as often, there are those who, like me, have enjoyed the companionship of both species. Cats have been my choice throughout much of life, mostly because they seemed more manageable. Cats are reliably independent. Dogs are clingers. A cat may mark you as their territory, but a dog wants you to be their best friend for life.

Those differences impact virtually every choice an owner makes. When I was working regular hours in an office in Seattle, I’d leave the cats to amuse themselves for the day, with the option to stay inside or head out of the cat door for further adventures. No worries there. These days I work from home, but should I need to leave the house for a few hours or longer, a lot of preparation is required. Does Cookie have food and water? Has she been out to empty herself recently? Where is Mr. B? Are the living room curtains open so she can survey the street? How’s the lighting? And so on.

Once those tasks are taken care of, and Cookie sees that I’m putting on a coat and getting ready to head out, I must gently break the news to her that she’s not coming with me. To stave off further disappointment, there may be a treat involved, along with an assignment: “Guard the house Cookie!” Even so, as I walk out the front, the last thing I see is a dog with her nose pressed up against the picture window and a look of betrayal on her face. Guilty! Guilty! Guilty! as Nancy Grace used to say.

Dog emotions are easy to read. They wear their hearts on their sleeves. Their expressions are painfully clear—joy, sadness, and guilt being the three strongest. Cats, on the other paw, keep their feelings hidden. They pride themselves on being deceptive, guarded, inscrutable.

Remember that in Alice in Wonderland, the Cheshire Cat wore a curious grin “from ear to ear,” and could appear and disappear at will, sometimes all at once, sometimes bit by bit. In the following conversation, the Cat sets Alice straight on one of the most important differences between cats and dogs, as per his rather curious point of view:

“We’re all mad here. I’m mad. You’re mad,” he insists. “How do you know I’m mad?” asks Alice, “and how do you know that you’re mad?” “To begin with,” the Cat replies, “a dog’s not mad. You see a dog growls when it’s angry and wags its tail when it’s pleased. Now I growl when I’m pleased and wag my tail when I’m angry. Therefore I’m mad.”

He’s got that part right. A dog wags to express pleasure, while a cat tail in motion is usually a threat or a defense. Mad or not, cats can be vengeful creatures. One of mine—a black cat with a white stripe down his chest and a big dose of attitude—got rankled when a new kitten was introduced to the household. Without further ado he dramatically sprayed the living room furniture, stomped out the door, and moved in with the neighbor across the street, never to be heard from again.

No dog would ever consider that to be appropriate behavior.

Despite their differences, both cats and dogs find ways to ingratiate themselves to their people, becoming all but indispensable to our happiness. They are expensive, time-consuming, and demanding, and yet they own us as much as we own them.

Yes, some people make do with fish, or lizards, or snakes, or turtles. There’s a lot to be said about certain types of birds, especially those that can speak to you. But the numbers don’t lie—it’s cats and dogs that clearly have the broadest pet appeal. During almost nine years together, Cookie has been my constant companion and best friend. We share many conversations, games, and adventures. We communicate well, both verbally and non-verbally. At times I am certain I know exactly what she is thinking, and she reads me like an open book. That deeply satisfying intimacy is special to dogs, and much as I’ve loved my many cats, I never reached that sort of a mind-meld with any of them.