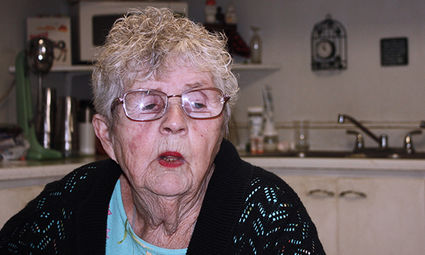 My recent visit with Starbuck's new Mayor, Zonia Dedloff, was a revelation for me. First thing I learned: she has lived there for 50 years. She and her late husband, Jerry, parked a trailer here in the late 1960s, along with many others, to work on building the Little Goose Dam. Jerry, a diamond driller, was one of many who traveled the U.S., following jobs like this. "It really was one long vacation," she said of those years. The dam work temporarily swelled the little hamlet's population. Although Jerry and Zonia had traveled through most U.S. states on jobs, Starbuck turned out to be their last stop.

"It was wall-to-wall trailers when we got here," she says of the dam workers. "But we just fell in love with the place." They watched the completion of the Little Goose and raised two boys, Jerry and Zonie.

"You'll never be considered a true Columbia County person unless you have family going back for generations," she quipped. "When we first got here, the locals referred to us as 'those damned dam workers.'" Others may differ, however. Over the years, the name Zonia Dedloff has become almost synonymous with Starbuck.

"When the boys were grown, I went through a terrible time with the empty nest syndrome," she said. I got a job bartending at Dorsey's" - a Dayton hotel, restaurant, and lounge of that era (now the location of Columbia County Commissioner's office). "I worked there 15 years." She'd already had a taste of bar life. Enter through the front door of Zonia's house, and you'll find it a foot lower than the rest of the house. "The previous owners of the house were drinkers and poker-players," she said. "There was nowhere for the single men to gather and drink. So they built this addition onto the front of the house for a bar."

Dedloff's home is a delightful museum of antique and vintage items filling every room. She owns a massive collection of old bottles, some more than a century old, dug up from the ground around town. All are displayed on shelves at her home. In a curio cabinet stands the first doll she had as a child, along with many others that followed.

Zonia was raised in Madras, Oregon, by her parents Zonie and Mabel Nance. She was the youngest of 16 children.

"My mother was an avid recycler before anyone talked about recycling," she said. "I'm one, too. I love to make something new out of something old."

Sitting in her house, it shows. Her recycling hobby led her to become a consummate crafter. Both skills shine in the hundreds of letters she has written over the years to shut-ins, the lonesome or the sick, just to cheer them up. She mails her notes in handmade envelopes.

Dedloff has logged many years as a volunteer at the Dayton Food Bank and the Dayton hospital gift shop. She has volunteered at the St. Vincent DePaul store in Dayton for 22 years. She was an organizer of the Dayton Farmer's Market and has become famous for her baked goods. She currently sells them at the Blue Mountain Station Co-op market.

After serving as a Starbuck councilwoman for many years, Dedloff ran for Mayor in 2016 but lost to a write-in candidate. As previously reported by The Times, Zonia was appointed Mayor on September 22, when Richard Ells resigned from the position, partly for health reasons. Her goals as Mayor? "Well, we need to do something about our water and sewer systems," she said. They're okay for now, but I'd like to see that completed if possible. And we have some new stop signs coming."

Only one was enough to make her and Jerry park their trailer in 1966, but I doubt anything will stop Zonia Dedloff from being an active part of the town she has championed for half a century. "I love Starbuck. I always have. the best thing about it is the people. There are great people here."