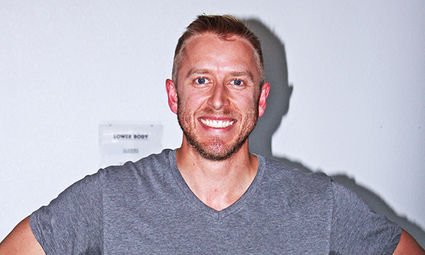 DAYTON–When Levi David Sowerby was 17 years old, a physician told him that a spinal injury he suffered during a gymnastics competition, was so severe it would result in paralysis. He would never walk again. Despite having been raised in a profoundly religious family where authority was not questioned, Sowerby knew at that moment that he could not accept that diagnosis. Though he continued to experience pain related to the injury, he was still walking. From that day to this, Sowerby's journey has been an amazing one.

Sowerby opened Vive Studios in Dayton in 2019. It is a circuit training facility, designed to move clients through a "corrective exercise" experience. Stations in the circuit include light exercises for the upper body, lower body, and core development - all emphasizing good supportive posture. There's even a version of hopscotch in place, which helps with brain and body coordination. A National Academy of Sports Medicine (NASM), Master Personal Trainer, he says his core motivation is to connect people to the healing their bodies are wired to do.

"It's about introducing them to the capabilities of their neurology, helping them to feel safe in all planes of motion, and as they feel safe, their body and brain will open up to the entirety of what they're meant to do."

The word "vive" refers to long life or the experience of being fully alive. Levi learned early that this was what he wanted for himself - and what he could help others experience.

After a massage provided unexpected pain relief from his spinal injury, Levi began to think about a career in massage therapy after high school. Levi asked James Waslaski, a renowned orthopedic massage therapist, author, and teacher in Dallas, Texas, to mentor him, and he agreed. One year later, he was still walking.

"I'm an anatomy and physiology nerd," he said.

He was motivated to learn everything he could about the body and its healing processes and went to a chiropractor, who ordered X-rays of his back. The report: "You have the most healthy, picture-perfect spine we've ever seen on an X-ray." Levi experienced what he refers to as "an emotional release" from the spinal injury, which further opened up his healing process. He now knew his life's work.

"I learned that all things are possible," he said.

He has continued to learn what brings people into physical trauma and what brings them out of it. Over the last 15 years as a health and fitness coach, he has taken clients that other therapists could not help. He has practiced massage, life coaching, and nutrition, along with the fitness training

The state's shutdown order in March was a challenge, one that included his COVID-19 diagnosis at the end of July. The disease manifested primarily as a "bad case of flu," he said. It attacked him as an inflammatory illness, affecting what he says were the "weak parts" of his body, through previous injury or genetic condition.

As one who is active about his well-being, he was reminded of how important it is to be "passive," just resting and being easy with oneself. A ketogenic diet was helpful to him.

"I do have high pain tolerance," he said, "but I tend not to look at these things as defeats. I take time to explore my heart, connect with life, and see what I can do to refuel the passion I have for life, and help others achieve that as well."

Levi has begun strategizing an online aspect of his business. He is in the process of developing an app for his coaching and training practice. In contrast to the cliché of "working out," Levi's tongue-in-cheek working title for the app is "No Pain, Just Gains."

If you search online for Vive Studio in Dayton, you may bump into Levi's mission statement, "To see this beautiful world of ours heal, one person at a time."