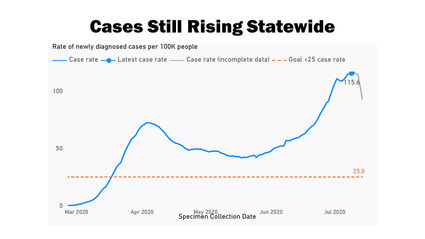 DAYTON—Columbia County Public Health Director Martha Lanman has reported one new positive case of COVID-19, over the past weekend, in a woman under the age of 50.

To date, 339 people have been tested for the virus in Columbia County.

Two tests are pending. There have been no hospitalizations.

Monday, July 20 Lanman told the Columbia County Health Board she would be working closely with school officials to provide a safe opening of schools on Aug. 29. She is hoping to avoid an “open, close, open, close, situation,” which would be the “worst-case scenario” for students, parents, and staff.

Governor Jay Inslee is restricting the number of people in gatherings, from fifty to ten, in Phase 3 counties, excluding spiritual services, weddings, and funerals. He has warned that further restrictions will take place if people fail to use masks, practice social distancing requirements, and limit gatherings.

The new restrictions were announced last week and took effect on Monday.