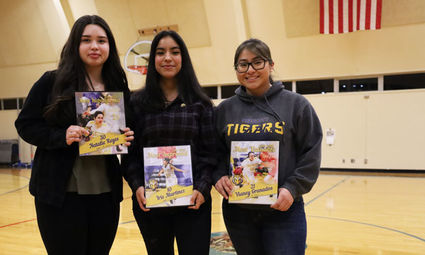 Natalie Reyes (Most Inspirational), Iris Martinez (Most Improved), and Vianey Granados (Most Valuable)

PRESCOTT-Athletic Director Jeff Foertsch hosted an awards ceremony on February 12th at Stueckle Gymnasium to honor the boys and girls basketball teams this year. First to speak was girls head coach Tiffany Hedman. She began with the highlights of the year for the girls program. The first was the overtime win against the Dayton-Waitsburg junior varsity with only four players on the floor for Prescott in overtime.

She went on to say, "The second highlight for me wasn't very long after that. I don't remember if it was College Place or who it was, but we were down by two, Hedra hit a three-poi...