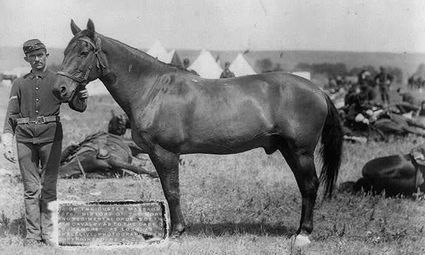 Blue Mountain Heritage Society will hold their annual Ground "Hog" Dinner on Saturday, February 1 at the Columbia County Fairgrounds Youth Building. This 12th annual event will include a historical presentation "Frank Finkel & the Sole Survivor Controversy," about the 1876 Battle of Little Bighorn, from Gary Lentz. Suggested donations for the event are $12.50 per person, or $35 per family, and will be accepted at the door. Dinner will be served from 5:30-6:30 p.m. with the presentation, and a live auction to follow.

Frank Finkel was a farmer from Dayton, WA, who told a story of how he managed to avoid the arrows and bullets on June 25, 1876, at the Little Bighorn Battlefield in Montana. As a member of Company C, 7th US Cavalry, his immediate company commander was Capt. Thomas Custer. Thomas Custer was the brother of Lt. Col. George Armstrong Custer who was in command of the 7th Cavalry that day and was killed along with his brother during that battle. Although most of Company C was destroyed, Frank Finkel told a fascinating story of circumstances and survival that has historians arguing its validity to this day.

Frank Finkel was born in 1854 in Ohio. After entering the Army in the early 1870's, Mr. Finkel came to Columbia County and found work in a local sawmill. He married Delila Rainwater in 1886. By 1911, Frank Finkel owned 820 acres of Dayton farmland. Frank Finkel died at the age of 86 in August 1930. He is buried in the Dayton cemetery.

Gary Lentz, retired Washington State Park Ranger, spoke with many people who directly knew Frank Finkel and has taken a serious interest in the story Finkel told. A question and answer session will follow for those interested in the story. 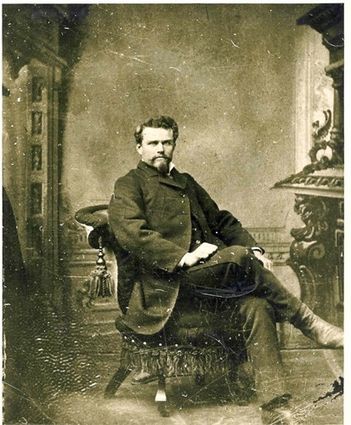 Blue Mountain Heritage Society is a membership organization dedicated to educating the public about the rich and diverse regional history and resources of southeastern Washington. All proceeds from the event will support the following BMHS projects: the Palus Museum, the Smith Hollow Country Schoolhouse, the Dodge Quarantine Cabin, and the Arduous Journey Sacajawea sculpture. All sites are located in Dayton, Wash.

The society also collects, preserves, displays and interprets materials "exemplifying the full sweep of human history from initial habitation by the native Palus People, through early European exploration and settlement, to the present day. Pertinent geologic and natural history provide context within which to tell the human story. "Visit them on bluemountainheritage.org