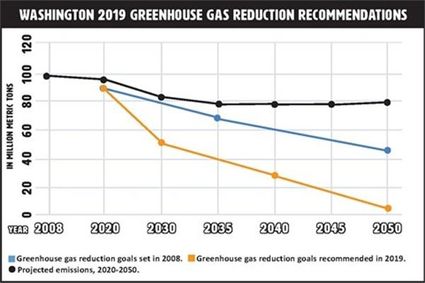 OLYMPIA-With new research predicting that climate change will cause serious damage to Washington's environment and economy, the Washington Department of Ecology is recommending the state make deep cuts in greenhouse gas emissions by 2030, and eliminate nearly all sources of carbon pollution by 2050.

Ecology based its new recommendations on the steps identified by international scientists and researchers at the University of Washington as necessary to limit the impacts of climate change. That research says that warming by just 1.5 degrees Celsius, or 2.7 degrees Fahrenheit, will mean a 38% decline in Washington's snowpack, a 23% drop in summer stream flows, and a 1.4-foot rise in sea level. Those changes will mean major challenges to our state's water supplies, hydroelectric power generation, and coastal communities.

"These won't be easy targets to reach," said Maia Bellon, Ecology's director. "However, our state faces dire threats from climate change, so we need to roll up our sleeves and do what is necessary to protect our communities, our environment and our economy."

The new recommendations would update the greenhouse gas emissions targets set by the Legislature in 2008. Under state law, Ecology is required to recommend updated targets as new science on the effects of greenhouse gases becomes available.

Ecology last issued recommendations in 2016. Those recommendations were not adopted by the Legislature. Since then, new research has shown that faster, sharper cuts are needed to prevent rising temperatures from shriveling Washington's water supplies, and increasing the threats from wildfires, rising sea levels, and acidifying oceans.

Emissions in Washington peaked in 2000 at 108.6 million metric tons of carbon dioxide equivalent, before falling sharply. In recent years, emissions have been edging up, reaching 97.5 million metric tons in 2017 as the state's population and economy have grown.

Washington is making strides in reducing future greenhouse gas emissions. In 2019, Gov. Jay Inslee signed a law requiring all electricity in the state to come from non-emitting sources by 2045. The law also requires utilities in Washington to stop using coal power by 2025. Other laws adopted in 2019 will increase building efficiency, cut the use of climate change "super pollutants" used in refrigeration, and provide more incentives for electric cars and charging stations.

"The steps Washington took in the past year will pay off with major reductions in future carbon pollution," Bellon said. "The next challenge will be for the Legislature and our state's leaders to build on that success and make broader and deeper cuts in emissions. This new report shows that there is no time to waste."