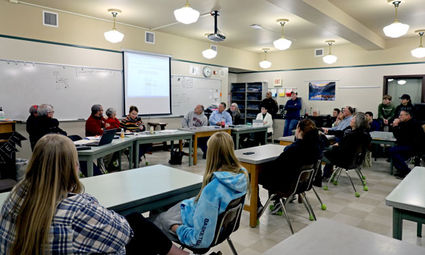 The Dayton-Waitsburg Athletic Combine advisory board reviews the results of the public survey last week. The meeting was well attended by coaches, athletes, and parents.

WAITSBURG-The Dayton-Waitsburg Athletic Combine Advisory Committee met December 11, at the Preston Hall Middle School in Waitsburg. The Board reviewed the results of the recent community-wide survey, discussed the data, and made a recommendation to both the Waitsburg and Dayton School Boards based on the information received and the feedback given by athletes, parents and coaches. Roughly 20 parents/coaches were in attendance, and roughly 20 student athletes were at the meeting.