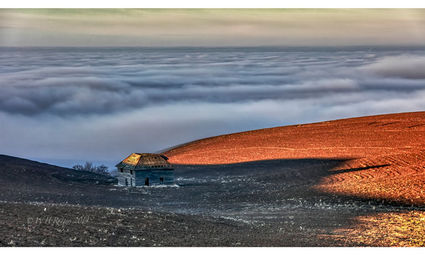 House About the Clouds

Patricia Keeney, who lives just down the road from the house in this photo informed Bill that the old home belonged to Art and Ernie Alford. She notes: "This is Art and Ernie's original home. The young Alford family dealt with scarlet fever early in the (last) century. Art and Ernie survived, as did an older sister, Maxine. Ernie was quite affected by the illness and Art became, for all intents and purposes, his caretaker. Art and Ernie, both life-long bachelors, later lived in a more contemporary home further down the draw. This home, nor its outbuildings, are still standing. Just this original homestead. I have met folks who have insisted that this was a schoolhouse, but that was not the case. There was a schoolhouse further up the road, on the right. All info per my mom, the late Donna Price Keeney, who was raised on the homestead just down the road from the Alford's. The Alford mailbox is still standing next to mine, and I keep it somewhat upright and cared for, in honor of Art and Ernie. Ernie walked down for their mail six days a week, rain or shine, with several dogs."