Local horseman takes the trip of a lifetime 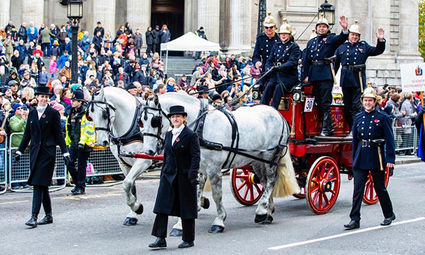 The Fire Wagon during the Lord Mayor's Parade. When it was in service, the wagon was manned by a driver and four firemen. Once at a fire, the wagon needed an additional 22 firemen to run the pumps and hoses.

WALLA WALLA-Each great adventure has its start. Some start out with a cup of coffee or a long drive, but a Walla Walla Valley horseman's adventure started with a custom ordered, horse-drawn omnibus. Daryl Hopson recently visited London for the Lord Mayor's Parade, and experienced England in what he says was the 'best way possible,'

In 2017, Hopson had a horse-drawn omnibus built by a company in Europe. The bus is complete with a spiral staircase that leads to an upper deck. The bus, once completed, was freighted across the ocean, and up the West Coast, eventually making its way to Hopson's...