By Carolyn Henderson
The Times 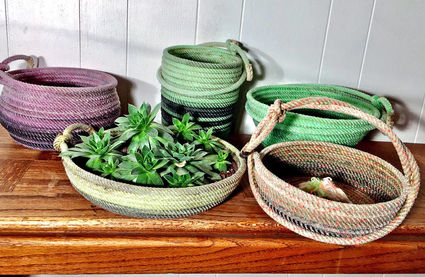 Many times, when people attend art festivals and see an item they like, they say,

“I could make that myself.”

And then they never do.

But Nancy Waldron is different. The first time the Colfax artist saw a rope basket in a catalog, she figured it would be no problem replicating the item, and proceeded to try.

“I figured I could make my own,” Waldron remembers.

“Being a team roper, I had more than a few old ropes lying around.

“Well I was wrong. I had no clue how to make them. My first attempt was horrible, but I kept at it, and now am proud of the products I turn out.”

Ten years later, Waldron still has that first basket. And, she has hundreds and hundreds of baskets – beautifully crafted, skillfully made – that she has sold all over the country in gift shops, art festivals, and at rodeos, the latter including the Pendleton Round-Up in Oregon and the National Finals Rodeo in Las Vegas, NV.

“I decided right from the beginning not to use glue or just wrap the ropes around a mold,” Waldron says. “I burn every inch of the nylon rope using a soldering iron.”

The result, she explains, is a basket that is as hardy as it is beautiful, able to be used as a planter under extreme weather conditions outside, as much as a utensil holder in the kitchen. She uses one long, continuous length of rope – recycled header or heeler ropes from rodeo team roping – and plays with the natural coil of the rope to create planters, egg collecting baskets, Easter baskets, pet beds, large baskets for kindling, and Potteropes, a term she coined for pottery shaped baskets.

“A lot of old ropes get tossed or just piled in a barn, so I am recycling and repurposing material that often would end up in a landfill,” Waldron says.

“Each basket is free formed and hand crafted – I don’t use any molds. They make great gifts.”

Through November 30, Wenaha Gallery (219 E. Main, Dayton) is featuring a large selection of Waldron’s baskets which, do, indeed, make great gifts. Waldron will be at the gallery in person Friday, November 29 from 2 to 6 p.m. as part of the gallery’s Christmas Kick-off Art Show. She will be joined by Kennewick photographer Nancy Richter.