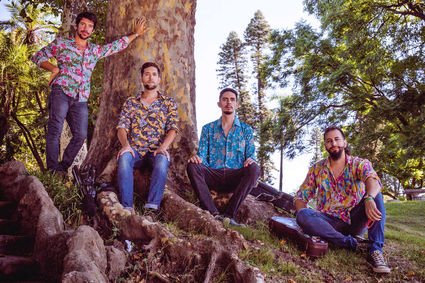 WALLA WALLA—Che Apalache is a four-man string band who have been taking audiences by storm with their fusion of Latin and American roots music. Led by Joe Troop, the band features three powerhouse Latin American musicians – two from Argentina, Franco Martino (guitar), Martin Bobrik (mandolin), and Pau Barjau (banjo) from Mexico. They will appear in concert at Gesa Power House Theatre on Friday, October 18 at 7:00 p.m.

Che Apalache began as a traditional bluegrass band, but eventually incorporated Latin American styles into their repertoire. Combining instrumental prowess with tight vocal harmonies, they have created an authentic blend of genres to reflect the nature of their lives. Evoking images from Appalachia to the Andes, their debut album, Latingrass, is a testament to a powerful cultural and musical exchange.

Reserved seating tickets ($35-$30 Adults; $20 Students) are available online or by calling the box office at 509-529-6500. Invite your friends and let them know you are going on Facebook!